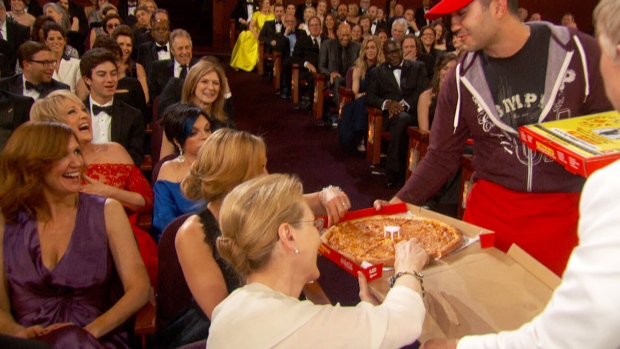 Even celebrities get hungry while wading through all of the Oscar acceptance speeches prior to sitting down to a full meal at the Governor's Ball. But leave it to clever Oscar master of ceremonies Ellen DeGeneres to find a solution to the munchies right in the middle of Sunday night's Oscar telecast.

DeGeneres threw an impromptu pizza party when she began asking Oscar nominees sitting in the front row of Hollywood's Dolby Theatre for their pizza order, with Julia Roberts, Meryl Streep, and Lupita Nyong'o thinking they were going along with a practical joke.

But within several minutes, a real pizza delivery man outfitted in a red cap and red pizza apron arrived, carrying several boxes of Big Mamas and Papas Pizzeria, which is a real life chain of pizzeria stores based in Los Angeles.

A representative for the restaurant chain confirmed that DeGeneres is already a customer, often ordering their pizzas to serve to the staff of her daytime talk show. And the man delivering the pizzas was not an actor, but an actual employee of Big Mamas, which claims to offer customers the world's largest pizza. Chiweitel Ejiofor and Jamie Foxx were among the actors chowing down.