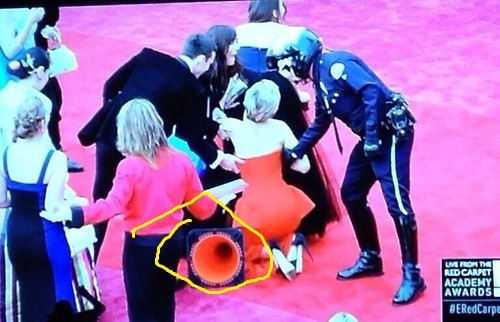 Hollywood, California - She's proved she was hot in her Oscar winning performance in the film "Silver Linings Playbook" and sizzling hot as the bougie-bride in her Oscar nominated performance in the film "American Hustle", but Jennifer Lawrence, the self-described tomboy from Louisville, Kentucky, apparently doesn't get along very well with high heels. For the second year in a row, she tumbled during her entrance into film making's biggest event of the year: the Oscars.

Then again, to invoke a mantra from "Silver Linings Playbook", a good pre-show tumble at the Oscars could just be her omen of good fortune. It certainly played out that way last year and there is a very strong possibility that she will capture a second Oscar tonight. This time around, Lawrence didn't make it to the red carpet as she tumbled within seconds of stepping out of her limo. In the footage caught by the E! Network, Lawrence tried to steady herself on her friend, but opted to tumble with grace rather than pull her friend down with her.

Mistake or not, the 23-year-old actress looked lovely in her satin red gown. This may be her last hurrah for a while as she is planning a year-long hiatus from film making to enjoy some time being just a regular person.