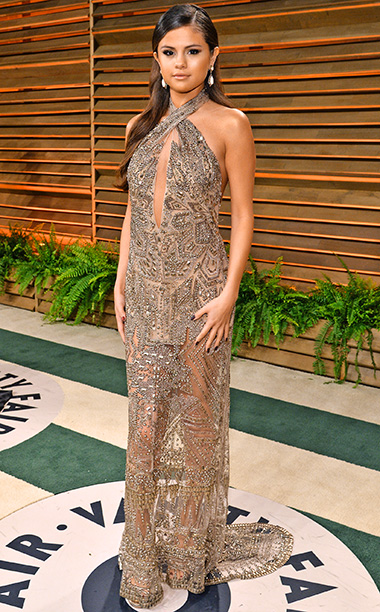 Justin Bieber Acknowledges His Princess[/caption]Some more confusion about the status of the whirlwind, on again off again relationship between Justin Bieber and Selena Gomez can be seen in a recent Instagram post on J-Bieb’s part.

After just celebrating his 20th birthday, seen getting cozy with some Victoria’s Secret models during a fashion show, and his stripper biting extravaganza, it seems odd for him to still seem so smitten. After all, he did take model Chantel Jeffries away on vacation with him and Selena was off to rehab. Things for the young couple do not ever seem to go smoothly. In fact, Selena even credits breaking up with him as a key turning point in her success.

Yet, “Most elegant princess in the world,” emblazoned a pic of Selena in a gorgeous, golden, full length, Emilio Pucci halter dress during the 2014 Vanity Fair Oscars Party. What makes the caption even more interesting is that this is the very same party where the couple went public with their involvement back in 2011. Was this incredible timing on his part, a romantic sort of gesture, or a sad displaced anniversary?

Either way, most of us see it as an attempt to win the songstress’ heart back. Recently spotted riding together in Justin’s neck of the woods, this relationship keeps their fans guessing. Could the notorious Jelena be on again?

Justin Bieber Calls Selena Gomez 'The Most Elegant Princess In The World'
http://www.mtv.com/news/articles/1723388/justin-bieber-instagrams-selena-gomez.jhtml