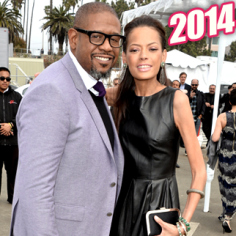 
In previous years acclaimed actor Forest Whitaker was recognized by the Academy Awards and film audiences for his fine work in films such as Platoon, The Crying Game, and this year's Lee Daniels' The Butler. He even won a coveted Best Actor Oscar for his portrayal of Idi Amin in The Last King of Scotland. This year on the red carpet people were talking about something other than his film work. His wife Keisha, also an actress appeared to be frightenly thin during her stroll past the paparazzi on Sunday night outside of the Dolby Theatre in Hollywood.

The 41-year old Keisha was wearing a sleeveless dress and many onlookers were very alarmed as she appears to have lost a lot of weight, some think too much weight. Over the last two years she has lost nearly 40 pounds and outside experts fear that such rapid weight loss could be potentially harmful to the beauty. If you match up pictures from award seasons of the past few years it is easy to see the dramatic difference in weight loss and her arms seem to stand out as being particularly thin. Fans of the famous couple are hoping that she can remain safely healthy.

Whitaker and Keisha were married in 2006 and are the proud parents of two daughters, True and Sonnet.

Video Of Justin Bieber’s Genitals To Be Released: Judge