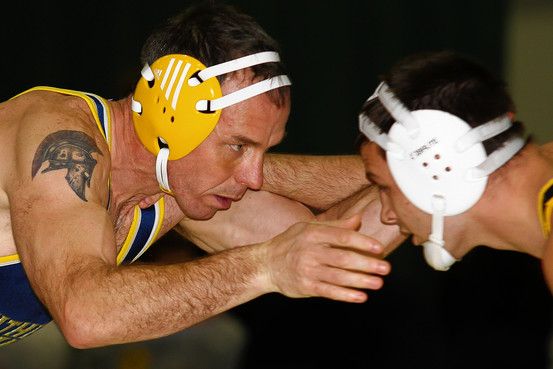 Rick Chipman, a very persistent and enterprising grandfather at age 44, became a scholar All-American wrestler and the co-captain of the wrestling team in his senior year at the University of Southern Maine. He will graduate this spring, after making the Dean's List every semester, and plans to enter law school this fall.

Chipman was a high school wrestler who almost won the state title twice and had dreams of wrestling in the Olympics, but he couldn't continue wrestling in college when he had to drop out in the first semester of his freshman year when his fiancée became pregnant.

Four years ago, in order to prepare for his life after a career as a firefighter and paramedic, he at last became a full-time college student despite his son, also a student there, thinking it was a stupid idea. But Chipman's first love was wrestling, which he credits with straightening him out as a young man. He then trained with a personal trainer, lost 35 pounds, wrestled with injuries such as a fractured rib at the recent NCAA Division III Northeast regional tournament, and finished his collegiate career with a record of 32-46.