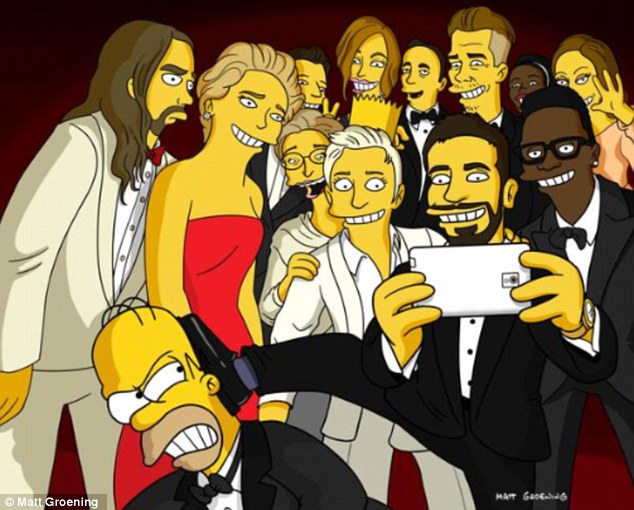 It was the best of selfies and the worst of selfies. Just as Bradley Cooper scored what can only be described as an awesome selfie of Hollywood stars caught genuinely in happy smiles, it has been revealed that he scored the awesome picture literally at the expense of Homer Simpson.

Yes, it's true that Cooper's picture featured wonderfully candid enthusiasm from himself, Jennifer Lawrence (who thankfully won't be going on a year-long hiatus), Meryl Streep, Ellen DeGeneres, Channing Tatum, Angelina Jolie, Brad Pitt, Lupita Nyong'o, and Kevin Spacey. However, what fans were not able to see was Cooper balancing himself by putting his foot directly on Homer's head to keep the star from appearing in the photograph and perhaps upstaging him.

It was Hollywood hubris at its worst with the classic zero-sum approach to happiness where one person's joy cannot coexist without someone else being left out. If it's any consolation to Homer, his son Bart was able to photobomb the event putting a peace sign behind the venerable actress Meryl Streep. At least Homer was able to get the truth out, but now that the party's over it's not clear what impact it will have. The damage is already done.