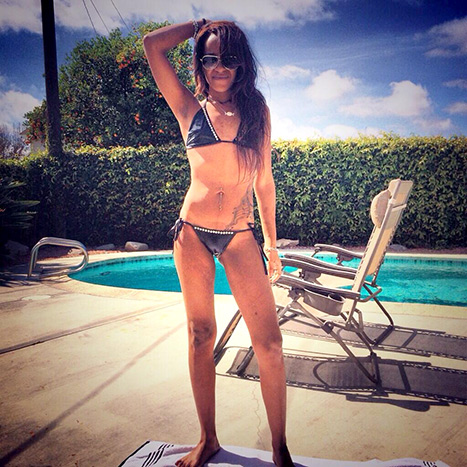 With the help of husband Nick Gordon, Bobbi Kristina Brown defended a recent Twitter photo of her skinny bikini body on Twitter, tweeting, "I am my mother's child! Have you ever heard of a fast metabolism?" Credit: Courtesy Bobbi Kristina
[/caption]Bobbi Kristina Brown Responds to Fan Concerns About Weight Loss
Needless to say, Bobbi Kristina Brown, the daughter of the late singer Whitney Houston and her bad boy husband Bobby Brown, shocked her fans with her new bikini body. Fans were stunned to see that 21-year-old sporting the body of a preteenager. The obvious concern is that she is doing something unhealthy to have such a low body weight.

However, Brown, who recently got married in January to Nick Gordon, claims her figure is the result of eating healthy and exercise. She says she's very happy with her looks. In addition, she asked her detractors to look into her eyes and see what it is that she and her husband see. Supposedly, we'll see clear whites for her eyes (a good indication of healthy eating) and clear vibrant skin (such as is had in people with a healthy cardiovascular system).

She adds that she is after all the daughter of Whitney Houston. Houston was known for her slender figure. It's not as if there isn't concern for substance abuse. Both her father and mother abused drugs for years. It took a big toll on her mother and contributed to her premature death at the age of 48 on February 11, 2012.