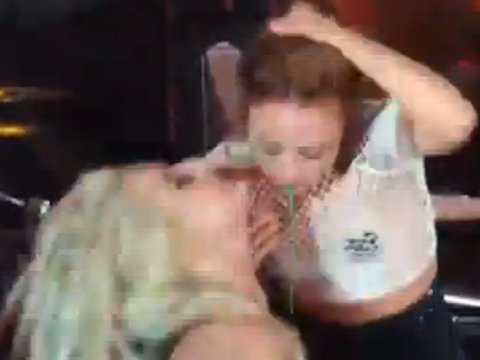 Eww! Lady Gaga Painted In Vomit[/caption]Lady Gaga Gets Painted in Vomit for Performance

Austin, Texas - Singer Stefani Joanne Angelina Germanotta aka Lady Gaga continues pushing the envelope of Avant Garde to new limits. For her appearance at the city's annual music festival she performed at the popular venue "Stub's BBQ". In the spirit of the venue, Lady Gaga had herself mounted to a spit where she was mock roasted like a pig by her dancers who basted her in barbecue sauce.

Also during the show, she performed a special number with the assistance of her friend Millie Brown, a self-described "vomit" painter. Really? Brown was on stage with Gaga. While the singer belted out the lyrics to the song "Swine", Brown drank a green liquid which she then regurgitated onto Gaga. Ew! Yes, Gaga let someone vomit on her. The two women later mounted a mechanical pig which then bucked as the women held onto each other and Gaga continued performing on a keyboard.

Another part of the performance included having a woman eat sausages with double entendre. Doritos sponsored this event to benefit Gaga's "Born This Way" charity. Gaga told her fans that it always better to be oneself rather than to purport being something one is not. Presumably she was speaking to those who have yet to come out about their true sexual orientation.

maria menounos 40 pound weight loss: How Did She Do It?