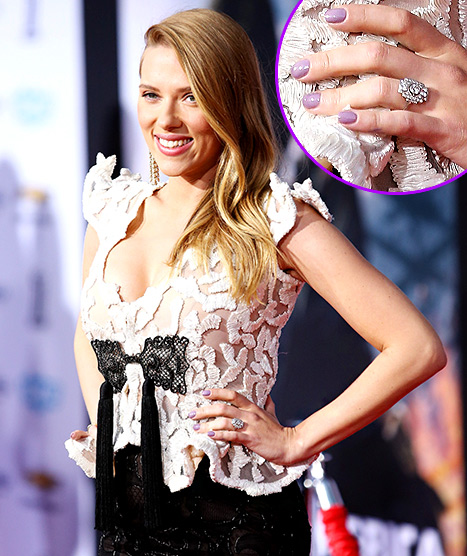 All eyes (and cameras) were fixed on Scarlett Johansson's baby bump as she walked the red carpet at the Hollywood premiere of Captain America: The Winter Soldier Thursday. This was Johansson's first red carpet appearance since confirming her pregnancy early this month.

Johansson looked stunning in a tight black and white Giorgio Armani Prive blouse and pencil skirt that accentuated her assets while attempting to camouflage her new tiny belly. The midsection of the white lace corset blouse was affixed with two awkward tassels, but she used the low-cut top to flaunt ample cleavage. The black pencil skirt with ruffled hem played up her famous curves, and the look was completed with even more lace featured in her Louboutin pumps.

The exciting baby news comes six months after it was confirmed that Scarlett Johansson had become engaged to boyfriend Romain Dauriac, a French journalist. This is their first child. The little bundle of joy is expected to arrive in August, making the Captain America star about four months along.

Marvel Studios president Kevin Feige has stated that no changes have been made to the new Captain America script to accommodate for a pregnant Johansson. Instead, scheduling when the actress will shoot her scenes as Black Widow will be crucial.