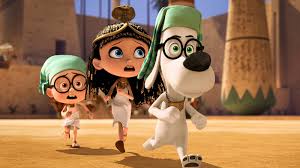 Forbes is reporting a quite surprising and ironic development that took place at box offices all across the country over the past weekend. According to reports released on Monday, "Mr. Peabody And Sherman" was the number one movie at the box office.

This development was all the more unexpected because critics and box office theorists alike have been nearly unanimous in branding the film an unmitigated and hopeless flop. But, in direct contradiction of their nay saying prophecies of doom, "Mr. Peabody And Sherman" raked in a not too shabby $21.2 million. This figure represents a drop of only 34% from a similar performance logged over the past weekend.

Does this mean that the critics, pundits, and prognosticators of the industry were simply wrong? The truth may be a bit more complex than at first meets the eye. It is certainly true that "Mr. Peabody And Sherman" has been performing well under industry expectations. However, it is also true that its recent checkered flag finish was brought about by factors that had little to do with its own success.

There were several other movies competing with "Mr. Peabody And Sherman" as family friendly fare. However, these other films, such as "Frozen", were compromised by being available in other formats before their general release to nationwide theaters. For example, "Frozen" was made available on VOD, and was also available to pre-order on blu-ray. Meanwhile, another potential competitor, "The LEGO Movie", has already been out a few weeks in general release.

Even if the number one box office ranking of "Mr. Peabody And Sherman" has turned out, upon closer examination, to be a bit of a fluke, it still sends a positive message to the American public. Meanwhile, it reassures Hollywood producers and investors that a positive return may still be salvaged from the entire affair.

Estimated ticket sales for Friday through Sunday at U.S. and Canadian theatres, according to Rentrak. Where available, latest international numbers are also included. Final domestic figures will be released Tuesday.

Estimated weekend ticket sales Friday through Sunday at international theatres (excluding the U.S. and Canada) for films distributed overseas by Hollywood studios, according to Rentrak: