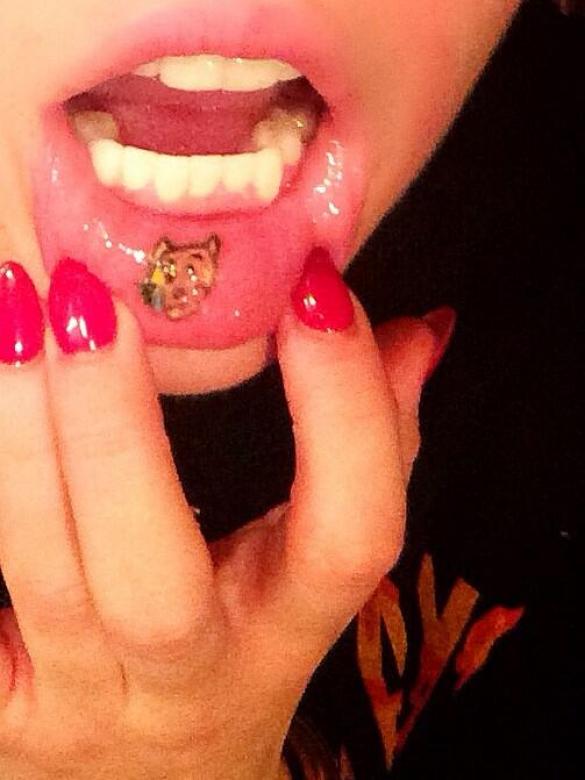 In Japanese culture, an emoji is a pictogram combined with letters to denote a special meaning. They can be used in business settings or to denote academic achievement. However, in the case of Miley Cyrus, it is used to garner additional "me too" attention. Cyrus just uploaded pictures of her with a new lip tattoo. It depicts a melancholy kitty. The colorful tattoo much surely have required a number of Novocain injections to keep the pain level manageable.

Cyrus admitted that her lip is quite sore and somewhat inflamed as a result of tattoo. Thus far, the young 21-year-old singer and actress has collected 20 tattoos on her body. Those "tats" include the words "Rolling Stone" (IE the music journal) to the soles of her feet. She also had a portrait of her grandmother inked on her body. Some of the tats are on her fingers and side of her body in close proximity to her "sisters".

Perhaps the singer could be asked to explain the purpose of the tattoo. However, the most likely reason is to put herself in the public spotlight. As for her fan reaction, it will likely be positive given that her fan base is extraordinarily loyal. Her recent appearance on MTV Unplugged became the network's highest rated show in ten years with 1.7 million viewers. Her "Wrecking Ball" video was viewed over 19 million times within the first day of release. It set a VEVO record. It will be interesting to see how graceful the tattoos age as she grows older.