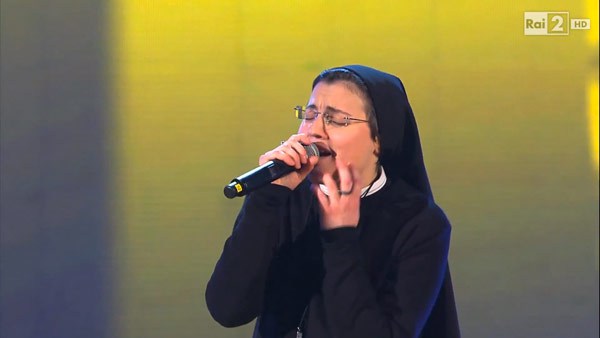 In the reality TV competition known as the voice, contestants vie for a position on the singing team of either of four celebrity judges. The judges have their back towards the stage and must judge each contestant on the sole merits of their voice. Upon completion of the number, the judges turn their swivel seats about to view the singer.

Well, in a recent episode of the Italian version of "The Voice" the judges were taken aback. Sister Cristina Scuccia was on hand, but not to offer comfort to the nervous contestants. She was there to perform a musical number and it wasn't a rendition of "Dominique" or "The Lord's Prayer", two hit songs from previous singing nuns. No, Sister Scuccia was on the show to perform something more lively: Alicia Keyes' classic "No One". Wearing traditional nun garb and a silver crucifix, the 25-year-old woman sans makeup rocked the house with her vocal capability. She had three fellow sisters offstage enthusiastically cheering her on. The crowd immediately got on their feet within the verse when it became obvious the religious figure could sing well. One by one the judges turned about to see her with great surprise. She was priased for her singing abilities. When asked about the potential Vatican reaction, she affirmed she had Pope Francis' approval.

Giuliana Rancic says Russell Crowe was her most awkward interviewee ever