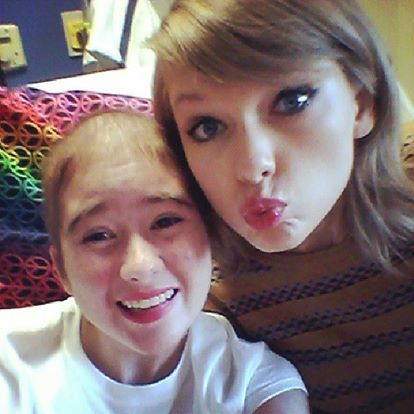 Taylor Swift Visits Young Cancer Patients In Heartwarming Video[/caption]
For most guests, overstaying a visit by nearly five times the original planned length is not a welcome change of plans, but when pop princess Taylor Swift did just that this weekend no complaints could be heard. Swift, 24, planned to visit pediatric cancer patients at New York Hospital Memorial Sloan-Kettering Cancer Center for one hour Saturday, March 22nd, but instead stayed to visit with patients and their families for closer to five hours.

The country singer, who enjoys a reputation as being one of the nicest stars in show business today, took time to talk with the hospital's young patients, snap pictures, and even Skype with one patient's sister. Swift's kindness earned raves from patients and parents alike who enthusiastically told of Swift's genuineness, class, and grace.

For her part, Swift did neither promotion nor publicity of the visit to the pediatric cancer unit. The starlet, often referred to as one of America's sweethearts, posted nothing to social media outlets about giving her time to the young patients.

Swift's young fans and their parents at the New York hospital were not as restrained in their use of social media. Word of Swift's visit spread quickly as social media exploded with posts, videos, and pictures of the reigning country queen's visit. "We are still in awe, Taylor Swift is a class act all around, she was so sweet, compassionate, asked US questions, got on Skype with my other daughter, stayed in our room and talked with us and was completely down to earth," says the mother of patient Shelby Huff, one of the patients with whom Swift visited Saturday. Swift shared some guitar pointers with Shelby on a video that has now become a YouTube sensation.

Swift is set to begin the Asian leg of her RED tour in June.

David Guetta and wife Cathy divorce after 22 years of marriage