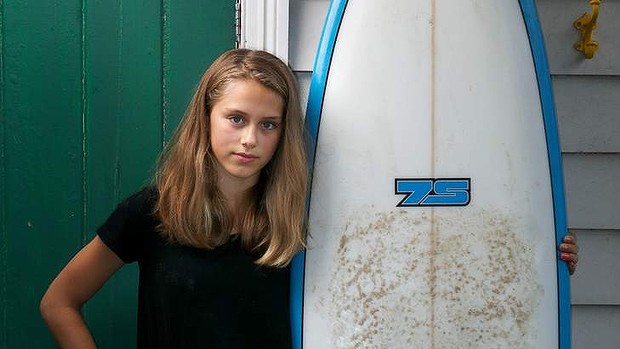 Tracks Magazine is a monthly periodical sold in Australia and which describes itself as the ultimate surfers guide or "surfer Bible". For 13-year-old Olive Bowers, a veteran surfer of 8 years, it is particularly disturbing that the magazine which speaks highlights surfers features no women. Well, it does, but they are in the role of the monthly babe a surfer is likely to score and not someone with actual surfing skills.

The young lady penned down her thoughts in a letter to Luke Kennedy, Tracks Magazine Editor. She described how she perused through the magazine's website which has a gallery of photographs of women. However, the women were all scantily clad babes none of whom were shown exhibiting any surfing skills. Ms. Bowers castigated the surfer journal for taking part in objectifying women for a narrow view of selective beauty.

Kennedy did reply to the young lady's letter and stated the obvious: Tracks Magazine is targeting a young male surfer demographic. For this reason, their stories tend to focus on male surfers and what their readers want to see from women which is implied to be a three letter acronym containing the same letters as the word "tan".

Ms. Bowers' letter elaborated on how she first came upon the magazine while at a friend’s house. She perused the pages looking for examples of female surfers only to find the stories about men. She made clear her concerns that neither men nor women be encouraged to think of female value as being founded in their physical beauty. She also claims to be part of a group of female surfers described as a posse which she plans on encouraging to abstain from purchasing the magazine. For the magazine's part, Kennedy affirmed there is no prohibition on running stories featuring women. He says that magazine has done such stories in the past. However, their subscribers are mostly men.

I want to bluntly address the way you represent women in your magazine. I am a surfer, my dad surfs and my brother has just started surfing.

Reading a Tracks magazine I found at my friend's holiday house, the only photo of a woman I could find was ''Girl of the month''. She wasn't surfing or even remotely near a beach. Since then I have seen some footage of Stephanie Gilmore surfing on your website, but that's barely a start.

I clicked on your web page titled ''Girls'' hoping I might find some women surfers and what they were up to, but it entered into pages and pages of semi-naked, non-surfing girls.

These images create a culture in which boys, men and even girls reading your magazine will think that all girls are valued for is their appearance.

My posse of female surfers and I are going to spread the word and refuse to purchase or promote Tracks magazine. It's a shame that you can't see the benefits of an inclusive surf culture that in fact, would add a whole lot of numbers to your subscription list.

I urge you to give much more coverage to the exciting women surfers out there, not just scantily clad women (who may be great on the waves, but we'll never know).

I would subscribe to your magazine if only I felt that women were valued as athletes instead of dolls. This change would only bring good. On The Web:
Olive Bowers, 13, writes fierce letter to Tracks magazine over its portrayal of women
http://www.news.com.au/lifestyle/fitness/olive-bowers-13-writes-fierce-letter-to-tracks-magazine-over-its-portrayal-of-women/story-fnlsv2b8-1226869033344