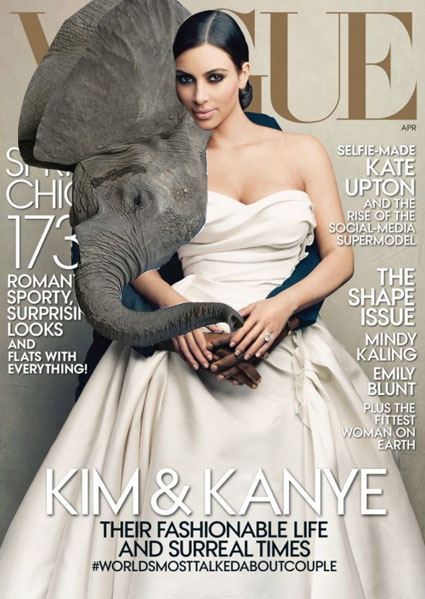 Kim Kardashian has long been the butt of many jokes about the junk in her trunk. Now we really can make trunk jokes!

The 33-year-old's attempt to take a selfie with a baby elephant went slightly awry on Monday, March 31, and sent the reality star running. While Kim's sisters, Kendall and Kylie Jenner, made friends with the adorable creature during their bikini'd photo shoot in Thailand, Kardashian's interaction didn't go quite as smoothly.

Thailand has really blown Kim Kardashian away! The social media-happy reality star, 33, got a rude awakening on Friday, March 28 when she tried to take a bikini selfie with a local elephant. As she smiled for the picture with the elephant behind her, the animal blew air out of its trunk and onto Kardashian’s hair, causing her to panic and run away from the blast. Obviously, she wasn’t hurt, just startled, but the hilarious photographs of the event are likely to start plenty of comical GIFs and Internet memes.

The look on Kardashian's face as she ran from the elephant is priceless, and even her mother, Kris Jenner, couldn't resist poking fun at her daughter for scaring so easily. Jenner posted the photos from the incident to her Instagram account, writing, "Ahahahahah @kimkardashian #scaredycat #hesjustababykim."

Kim Kardashian made a detour during her family's Thai vacation to spend quality time with children who do not get enough of it. Her visit to a Phuket orphanage included toy donations, hours of games, and a tour of the foundation.

Kim's siblings Khloe, Kendall, Kylie, and Brody, along with her mother Kris and estranged stepfather Bruce Jenner, wanted to pitch in too. They spent hours entertaining the orphans, playing games they donated or sports involving newly purchased gear. A source says the sisters were especially good with the kids.

The family helped the children hand paint a mural on the side of the Home. They incorporated personal messages and quotes to inspire residents of the orphanage even after they had gone.

Their visit wrapped up with a tour of the facility and surrounding village. The Kardashian family held hands with their new young friends throughout the site seeing, and ended their excursion with tear filled good byes.

Even on vacation Kim Kardashian likes to water her philanthropic roots. In between zip lining, elephant rides, and exotic beaches she insisted on utilizing her "Keeping Up with the Kardashians" film crew to bring awareness to the orphaned children of Thailand. The Anonymous source says that although the children do not know her fame, they will remember the gift Kim gave them.

KIM KARDASHIAN ATTACKED BY AN ELEPHANT WHILE TRYING TO TAKE A SELFIE WITH IT
http://www.sugarscape.com/main-topics/celebrities/1028902/kim-kardashian-attacked-elephant-while-trying-take-selfie-it