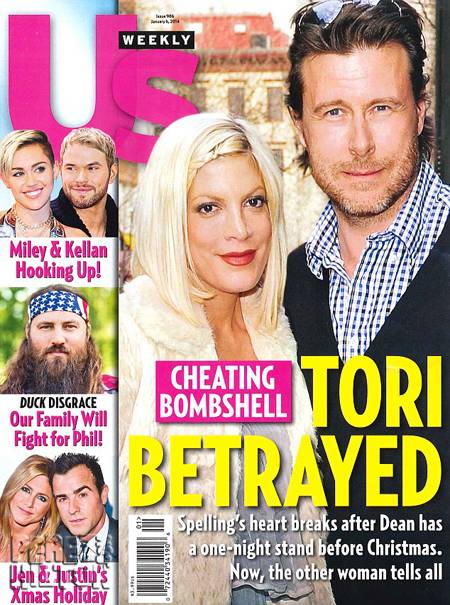 Lifetime Television is planning a new reality series starring actress Tori Spelling. "True Tori" will focus on the former "Beverly Hills 90210" star's unhappy marriage to Dean McDermott, which recently began to quickly unravel after reports that he was unfaithful to her. The series, which premieres on Lifetime on April 22, is divided into six installments. It begins with hubby McDermott ending his stay at the rehab facility he checked into after reports of his cheating became public.

People reports "Lifetime will air a new docu-series called True Tori that will follow the couple as they work on their relationship, beginning when McDermott leaves treatment, the network says in a press release. The series will premiere just three weeks after the reality show begins filming and continue with a total of six hour-long episodes that document the family in crisis."

Officials at the Lifetime network say that Spelling's decisions to allow cameras to invade her personal life during a time of crisis in her marriage is both courageous and difficult. Viewers will be invited to get an insider's glimpse into one of Hollywood's most talked about unions in real time, as incidents occur, without any script. Spelling and McDermott have been married since 2007 and are the parents to four children, all of whom are less than 6 years of age.

Producers of the new reality show insist that no one, including Spelling or McDermott, knows just what will happen from week or week, if the couple's marriage will survive, or if they will go the route of many in Hollywood and settle for a long and contentious divorce. Spelling, the daughter of legendary entertainment producer Aaron Spelling, is no stranger to reality television. The once-divorced Spelling and second husband McDermott have already appeared as themselves in other reality TV productions.