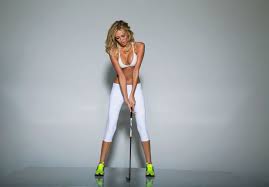 Paulina Gretzky, the daughter of Wayne Gretzky, is without question stunningly beautiful and naturally seductive. It is a quality of her persona that she works effectively and it sells as attested by her cover shot for Maxim Magazine this past December. She is also engaged to professional golfer Dustin Johnson who works the PGA Golf Tour circuit. So it would not appear to be a stretch of the imagination to feature her on the cover of Golf Digest. Admittedly, she is no golfer and her presence on the cover is designed to sell magazines based on her potent sexual appeal.

Golf Digest, which bills itself as "the authority on how to play, what to play and where to play," has explained that as the fiancée of PGA Tour pro Dustin Johnson, Gretzky is a major celebrity in the golf world and thereby qualifies the recognition of a cover story.

"Sports figures, celebrities and models have appeared on Golf Digest covers since the magazine's beginning," the publication's editor in chief, Jerry Tarde, says in a statement. "Paulina ranks at the high end of the golf celebrity scene today, and she has a compelling story to tell. She also might get some new people interested in the game."

The Ladies Professional Golf Association (LPGA) takes issue with the magazine and has voiced their strong disapproval that Gretzky appear on the cover as if she was a golfer. The LPGA expressed a desire that any of their professional golfers grace the cover to promote more women in the sport. Well, it isn't very reasonable to assume that Golf Magazine has the same business objectives of the LPGA. However, the strong stance by the organization does appear to be arbitrary. When voluptuous model Kate Upton graced the cover there no one's righteous indication was kindled at the LPGA. If there was, no one made mention of it. Neither was there any complaint when golfing legend Arnold Palmer, who is not a female golfer, appeared on the cover presumably at the expense of a professional female golfer. After all, fair is fair. In fact, the last time a female golfer made the cover of Golf Digest was back in 2008 and was Lorena Ochoa of Guadalajara, Mexico. Profession golfer Stacey Lewis said that female golfers struggle to gain the respect they deserve and expressed a desire to see Golf Digest promote more female golfers, but added that their objective is to sell magazines. Paulina Gretzky is no stranger to showing some skin. the socialite has been posting racy photos online for several years now[/caption]

"It's the state of where we've always been. We don't get the respect for being the golfers we are," Stacy Lewis, a top-ranked American golfer, has told press, according to USA Today. "Obviously, Golf Digest is trying to sell magazines, but at the same time you like to see a little respect for the women's game."

What do you think of the Paulina Gretzky golf magazine controversy? Should Gretzky posed for the cover?