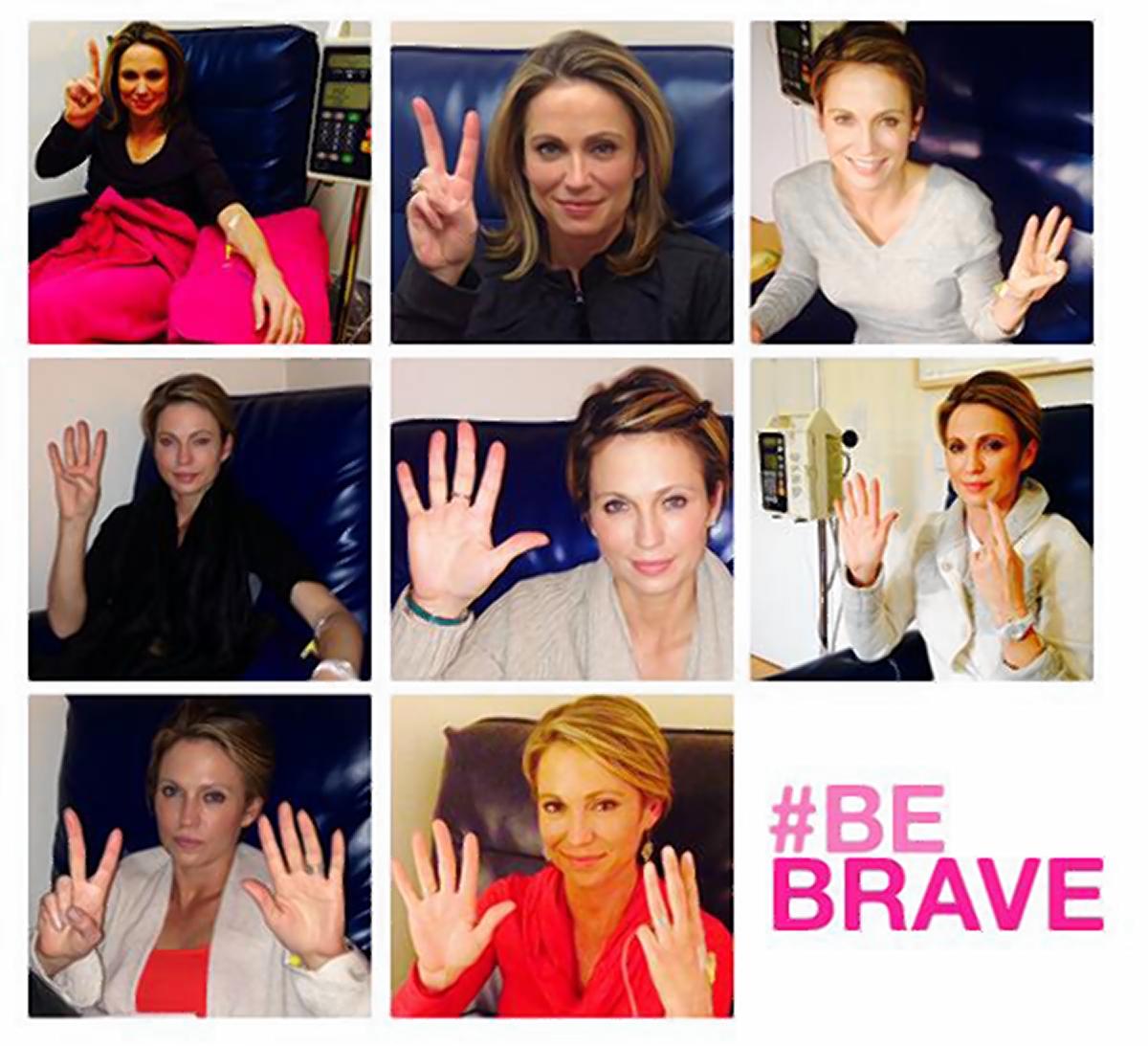 Good Morning American (GMA) host Amy Robach has completed her battle against cancer. Her treatment was scheduled to last eight sessions and she tweeted pictures of her posting the number of the upcoming session with the fingers on her hands. Yesterday marked her eighth and final treatment session. The attractive 41-year-old tweeted a photograph of herself on the hospital table in the hopes it would inspire others locked in similar battles. Her hashtag was "Be Brave". The popular daytime host has a loyal following of 51,000 Twitter fans.

Upon arriving home from her last treatment, knock wood, she found her front door decorated with get well messages from her loved ones. Most messages were expressions of pride for her valiant fight. Robach, who is in her second marriage, is a mother to five children two of which are biological children. She was diagnosed with breast cancer this past fall. She has relied on her work with GMA to give her a drive and outlet during the emotionally trying encounter with her own mortality. Her treatment involved getting a mastectomy, but the surgery revealed the cancer had metastasized into her sentinel lymph nodes. This prompted the chemo therapy. Shock: She was diagnosed with cancer after undergoing an on-air

Citing her job as a source of purpose, she covered the Sochi Olympics in Russia while undergoing her chemo therapy. After her initial diagnosis in October, she went on short-term disability, but she returned to work in December. Chemo therapy is physically demanding and she takes regular naps to maintain her energy.

Despite that, she says there were times it would take several days before she felt her energy level return to normal. The next and final stage of her recovery is breast reconstruction. Doctors were able to save her nipples during the mastectomy which will allow a more realistic breast reconstruction later this spring.

Robach also recorded a clip for her show during her last treatment.
"I join the ranks of 2.8 million women who a breast cancer survivors," she said. "And I plan on living each day to the very fullest, thankful and grateful, and encouraging so many women out there who are still in the thick of it, who have yet to fight this fight, that you can do it."

"You can get through this, one step at a time," she continued. "And I am there for you, I am there with you. With my eighth and final chemo complete, I will start on a new journey, helping raise awareness about early decision, and letting women everywhere know, 'You can kick cancer's butt.'"

Celebratory tweet: Robach, 41, accompanied the image with a message announcing that on Thursday she had her eighth and final chemo session[/caption]