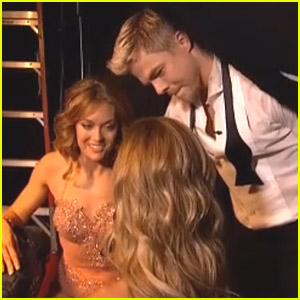 Last week, Danica McKellar broke a rib during practice. Now, another contestant has been injured. Olympic snowboarder Amy Purdy, who is partnered with Derek Hough, was injured during practice and rushed to the hospital. She tweeted her fans that she was absent from the team dance due to severe back pain. Apparently, she exerted herself too much and at one point pivoted with her back at which time she experienced a loud cracking sound followed by a lot of pain.

Speaking with Erin Matthews, the Olympian expressed difficulty breathing as a result of the back spasm.

In her tweet to fans, the 34-year-old apologized for not taking part in the team dance, but said she really nailed it during practice wherein she described her and Hough as kicking the proverbial human posterior.

However, it would appear that her back would take issue with that description as it appears the rehearsal ended up kicking her posterior.

"Thanks for your support everyone!" she wrote. "The [doctor] thinks it's muscular, still waiting on the official word… As we walked away from the judging table my upper back cracked and went into spasms… in pain but I'm in good hands."

She added, giving fans an update on the situation, “As we walked away from the judging table my upper back cracked & went into spasms..in pain but I’m in good hands…Can not believe I had to miss the #TeamDance…thank you to all of you for your kind words and support.”

Up to this point, she's been considered a viable contender for the top honors. It isn't known when she'll return which puts her performance next week in question. Purdy recently took home the Bronze Medal in the 2014 Sochi Olympics in Russia. Amy Purdy Injures Back at 'DWTS'; Updates Fans From The Hospital[/caption]

Amy Purdy Injures Back at 'DWTS'; Updates Fans From The Hospital
http://www.justjaredjr.com/2014/04/29/amy-purdy-injures-back-at-dwts-updates-from-the-hospital/

Related Topics:amy purdy hospital
Up Next