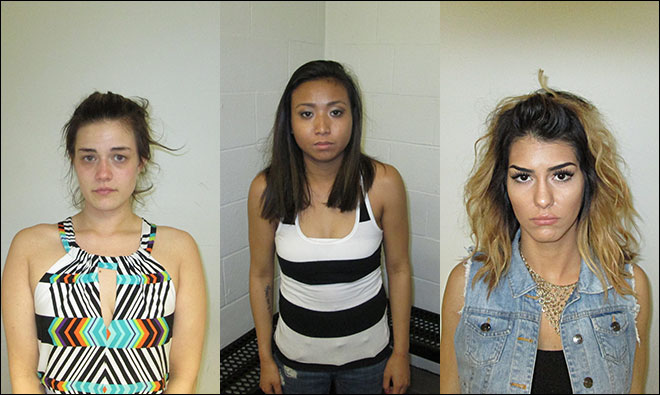 Beaverton, Oregon - It may be an offense worse than square dancing in a round house as three women were arrested for twerking in front of the county court house. Well, truth be told twerking was the least of what they did and in and of itself wouldn't have landed any of them in jail, reports the Huff Post.

What happened is that one of the women, Laura Valazquez, arrived to pay a speeding ticket.

Quite likely, she wasn't pleased about having to part ways with her money. As soon as the fine was paid, Valazquez and her gal pal Brittany Medak started twerking just outside the court house windows.

At some point during their twerking and grinding on one another, the two women exposed their private parts as part of the dance. Aside from the colossal lapse in judgment thinking the flashing their lady parts in public view of a government building wouldn't violate a single statute, Medak took the liberty of relieving herself in the parking lot.

Words ‘Twerking’ And ‘Selfie’ Added To The Oxford Dictionary

Their other friend Leokham Yothsombath used her camera phone to record evidence of the crimes for the prosecution. However, it probably didn't occur to her that's what she was doing at the time either. In all likelihood, the recording probably didn't make a difference as city employees witnessed the incident and could act as witnesses. Afterwards, the women got in their car nonchalantly and drove off not realizing that police were on their way to arrest them.

Three block later, they were pulled over. Because they were in their car, officers were allowed to search their vehicles and found drugs. A drug possession charge has been added to the misdemeanor charge of disorderly conduct. It isn't clear if all three women were charged with drug possession. In short, all three slender women (in their early 20s) were mainly guilty of acting their pant size as opposed to their ages. Manitoba’s Plan To Kill Zebra Muscles, Harbors to be Closed a Fortnight