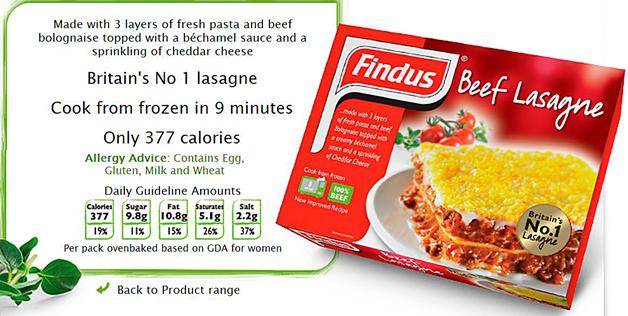 A number of beef lasagna products recalled from British stores were found to contain more than sixty percent horse meat, according to a report from the Huffington Post.

This was discovered by the United Kingdom food and safety authorities.

This shocking discover is a small part in the huge problem surrounding the use of horsemeat and meat mislabeling occurring in Europe. Numerous frozen food companies have recalled several of their meat containing products such as frozen lasagna after concerned were raised. Aside from that, millions of burgers from three companies in Britain and Ireland have been removed from store shelves.

The Food Standards agency has said that there is no evidence of a food safety risk but more tests have to be done. These upcoming tests will check for the veterinary drug phenylbutazone which can affect a human’s health.

Catherine Brown, chief executive of the U.K. Food Standards Agency, said that following its investigations into Findus, the agency is demanding more comprehensive meat testing from the food business "in order to demonstrate that the food it sells and serves is what it says it is on the label."

"We are demanding that food businesses conduct authenticity tests on all beef products, such as beef burgers, meatballs and lasagna, and provide the results to the FSA. The tests will be for the presence of significant levels of horsemeat," she said in a statement.

Although this is not being labeled as a health risk, people of Britain and Ireland are disgusted and are worried about their food security.

According to a report from CNN, Horse meat is not commonly eaten in the United States, but the country does export it to Canada and Mexico. Congress passed a bill in November 2011 that lifted a 5-year-old ban on the slaughter of horses for meat in the United States.

Slaughtered Horses From The U.S.

Each year, tens of thousands of American horses—riding horses, carriage horses, race horses, wild horses, and children’s ponies—are inhumanely transported and slaughtered, their meat shipped to places like France, Italy, and Japan for human consumption. Horses are not raised as food animals in the United States and therefore receive medications that are banned by the Food and Drug Administration and the European Union for use on animals raised for food.

The U.S. has no system for recording medications given to horses over the course of their lifetimes and no way to remove horses from the food chain once they have been given prohibited substances.

The majority of these horses are young,healthy animals who could go on to lead productive lives with loving owners. 80% of American’s strongly opposed the senseless and barbaric slaughter of horses. Pro slaughter is greed and profit disguised as compassion. Slaughter is not a humane and our American horses are treasured icons and the very symbol of freedom.The equine is labeled as a companion animal by the FDA.

The American Horse Slaughter Prevention Act (S. 1176/H.R. 2966) bills have fallen silent. Please demand they be heard and brought to a vote. Please speak for the voiceless! The American Horse Slaughter Prevention Act will ban the barbaric slaughter of American horses for human consumption overseas, end the wasteful tax increase needed to slaughter, and shall include the export of live horses across our borders for slaughter.

The furor over the Findus lasagna prompted humor as well as outrage on Twitter.

"If you think the Findus Lasagnes are bad, you should try their Filly Cheese Steak," wrote James Martin, posting as @Pundamentalism.

Comedian Adam Hills, posting as @adamhillscomedy, joked: "Those horses wanted to be uncovered in British Lasagne. Even the brand was called Findus."