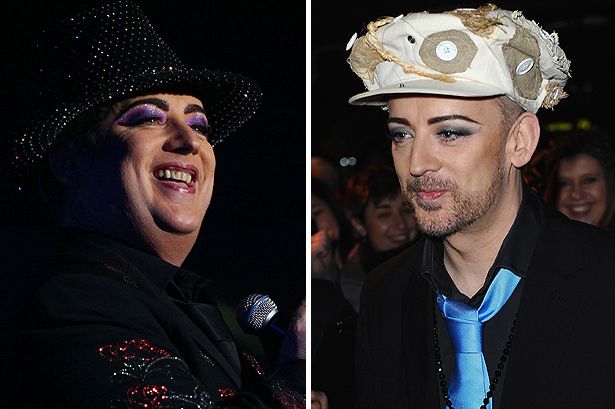 Boy George Weight Loss: Culter Club Singer Is Half The Man He Use To Be[/caption]Boy George Flaunts Younger, Trimmer Body

Fans watching pop star Boy George walk the red carpet at a recent awards event may have thought that their idol had stepped out of a time machine.

George, who in recent years has allowed his body to become quite chubby, has been on a weight loss program that has resulted in his losing almost half his body weight and looking at least 20 years younger.

George hasn't hesitated to let his fans know via Twitter that his new body and appearance are the result of his following the Freer Nutrition Plan touted by Amelia Freer.

He explained that portion control of the foods consumed were a big part of the diet plan, as well as drinking only water and carbonated water between meals, with no coffee or tea allowed except at mealtimes.

The singer-songwriter has documented his journey on Twitter, sharing everything from advice from his doctor to reactions on his healthy lifestyle.

"I've been doing burst of exercise all day and everyone thinks I'm a bit mental! Lol!" he Tweeted on Jan. 31.

He wrote recently: 'Portion control. 5 hour gaps between meals. No coffee or tea, except at meals. Water & fizzy water between meals!

"Mmm, porridge with cherries & a dash of cinnamon! Cook the cherries with the porridge! Bloody gorgeous!" he tweeted on Feb. 8.

George also revealed he achieved the dramatic weight loss by spacing his meals 5 hours apart and banning sugar and bread from his diet.

The singer also seemed quite pleased that news of his weight loss was buzzing online, as he tweeted, "I love that the size of my ass is trending worldwide!"