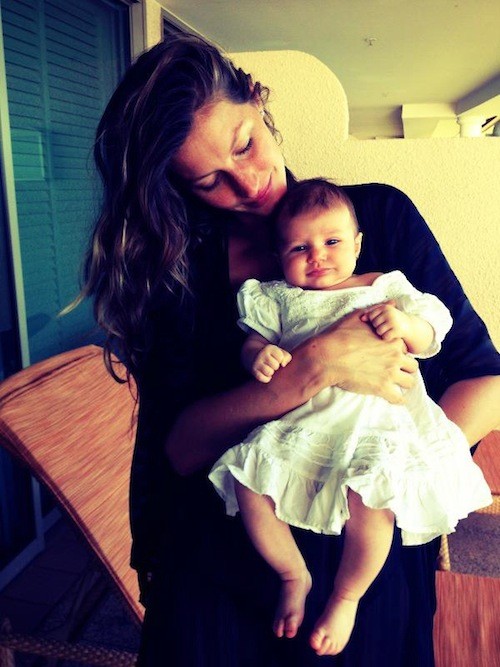 Gisele Bundchen, also known as Mrs. Tom Brady, is no doubt the envy of many women with a bikini-ready body only four months after the birth of her daughter, Vivian Lake. The 32-year-old supermodel was spotted on a beach in Costa Rica, where she and the baby girl are vacationing with Brady, the couple's son Benjamin and the family dog.

The photos snapped and posted to the media on Wednesday showed Bundchen in a colorful string bikini, carrying Vivian against her chest in a rucksack.

Bundchen claims a strict regimen of yoga and kung fu exercises kept her fit and strong during the pregnancy and allowed her to quickly return her body to normal. She created a media stir right after Vivian's birth by stating, "I did kung fu up until two weeks before Benjamin was born, and yoga three days a week. I think a lot of people get pregnant and decide they can turn into garbage disposals." The comment was considered highly offensive by many women.

The model also had interesting comments about the birthing process. Bundchen stated that she did not feel any pain during the contractions, as her mind was focused completely on bringing the child into the world.

So she can regain her figure and giving birth didn't even hurt? Wow!

What do you think of Gisele's post baby body?

Octomom Fraud? Mom Of 14 Under Investigation