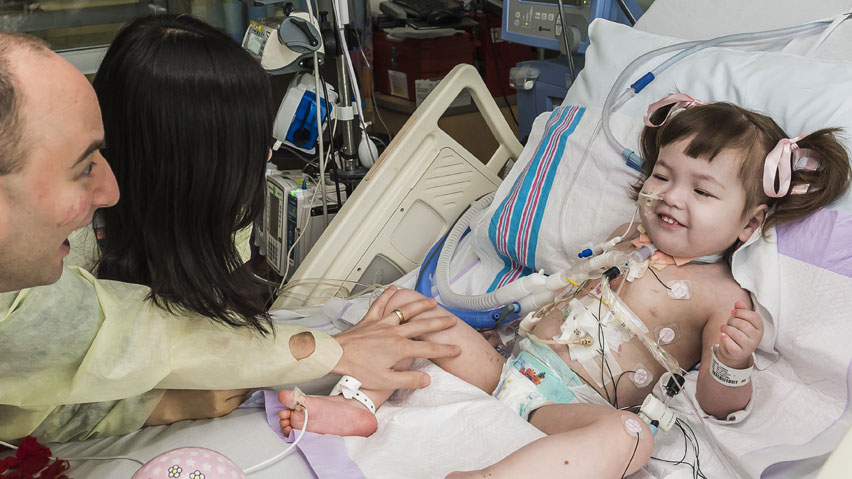 Darryl Warren and Lee Young-mi visit their 2-year-old daughter, Hannah Warren, in a post-op room at the Children's Hospital of Illinois in Peoria after the 2-year-old girl received a new windpipe in a landmark transplant operation earlier this month. (Jim Carlson/OSF Saint Francis Medical Center/Associated Press)[/caption]

A two year old girl has recently received a revolutionary surgical procedure that has changed her life vastly for the better. Born without a windpipe, Hannah Warren has spent her entire life in the ER, connected to a tube that connects her mouth to her lungs.

The new procedure, which was recently approved by the FDA, used Hannah's own stem cells, taken from her own bone marrow in order to create a windpipe that will not be rejected by her own immune system.

After the windpipe was created outside of her body, the operation commenced. The operation lasted nine hours and appears to be a resounding success. Approximately one month has passed since the windpipe transplant, and Hannah's body shows no adverse reaction to the operation.

"They hope that she can do everything that a normal child can do but it's going to take time. This is a brand new road that all of us are on," he said in a telephone interview. "This is her only chance but she's got a fantastic one and an unbelievable one."

"It's going to be amazing for us to finally be together as a family of four," he said. The couple has an older daughter.

This is likely due to the fact that the cells used to create the windpipe were stem cells, which are cells that have the ability to become any type of human cell, from any part of the body. This landmark treatment has rocked the medical world, showing us one of the many potential uses of stem cells.

For Hannah Warren, this is of little importance. She is simply happy to leave.

According to the Associated Press, only about 1 in 50,000 children worldwide are born with a windpipe defect or without one. For these patients, and for others with defective or diseased organs, manipulating stem cells to generate healthy tissues or organs could be their only chance at survival.