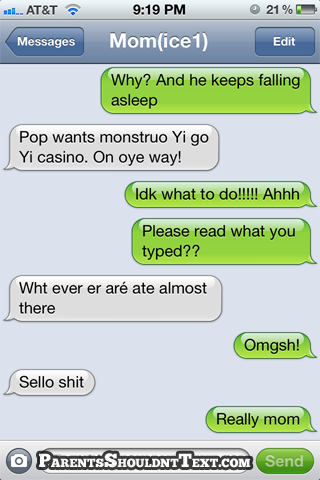 Text and email miss-communications happen every day, and an accidental key press or auto-correction software error often results in a laugh or an apology.

This year, the medical community has come to learn that text errors can also be symptoms of certain health issues, such as stroke.

With a stroke, blood flow to the brain slows or stops, and oxygen loss and brain damage results in diminished memory, unfocused thinking and aphasia, or language difficulties such as slurred speech and writing problems.

Neurologists at Brigham and Women's Hospital in Boston first noticed the phenomenon when a husband brought his 25-year-old pregnant wife to the emergency room after receiving strange text messages that featured gibberish and off-sounding sentences.

Here’s a sample of the texting transcript between the couple:

Three of the Boston Harvard Medical doctors realized her symptoms could be a sign of stroke and presented their findings about this "new" phenomenon they called "dystextia" to the medical community in December. The term also describes when a person has difficulty interpreting or comprehending typed text messages.

“It may be a new area of language that hasn’t really been explored or tested,” Dr. Omran Kaskar, a senior neurology resident at Henry Ford Hospital who treated the patient, told The New York Times. “In humans, language evolved. Is text messaging some sort of new specific language that the brain is developing?”

Since December, doctors have started to study the phenomenon in detail. So far, the general consensus is that asking about dystextia when reviewing a patient's history can help save lives.

Bizarre texts could be sign of health problems
http://www.bostonglobe.com/lifestyle/health-wellness/2012/12/31/bizarre-texts-could-sign-stroke-other-health-problems/3PMRbRVeQ1V0tpjw9VDIQL/story.html

“Dystextia”: Garbled Text Messages Could Be Sign Of Stroke
http://newsfeed.time.com/2012/12/26/dystextia-garbled-text-messages-could-be-sign-of-stroke/