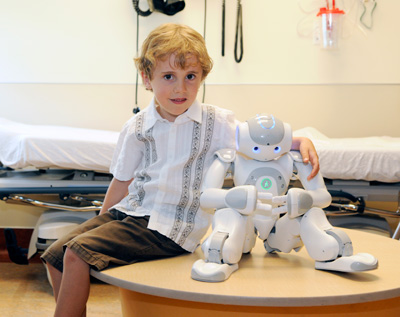 A children's hospital here in Canada has found a unique way to reassure children who are afraid of vaccination needles. The Alberta Children's Hospital has introduced a talking robot by the name of MEDi who engages children in conversation prior to them receiving an injection.

In studies done using MEDi, an acronym which stands for Medicine and Engineering Design Intelligence, young patients who interacted with the personable robot prior to being injected were found to feel less pain and were able to resume normal activities in a much shorter amount of time.

“These results really do show the potential and benefits for using robotics to help manage a child’s pain while having a medical procedure done,” says lead investigator Tanya Beran of the Faculty of Medicine. “Robotics can be used to help manage children’s pain during blood tests and IV starts, and other painful procedures such as stitches or a fracture set. The opportunities are endless.”

MEDi's actions are timed to distract the child being given the injection. MEDi asks for the child's help in doing some simple activity such as blowing the dust off a toy object. While the youngster is engaged in the activity requested by the robot, the medical professional is able to administer the injection while the child is not focused on the pain and anxiety the procedure usually causes them.

Scientists report that the distraction offered by the talking robot helps the child breathe more deeply, which in turn keeps their muscles more relaxed when the injection is administered. The hospital reports that parents enjoy interacting with MEDi as well.

Dr. Susan Kuhn, section chief, infectious diseases, Alberta Children’s Hospital, says the robot could be a valuable tool. Studies show half of all young children experience severe distress and anxiety when it comes to getting vaccinations.

“Getting poked with a needle is uncomfortable and is often associated with pain, so children usually arrive crying and literally kicking and screaming,” says Kuhn. “Any distress a child experiences early on carries over into adulthood. We want to create a more positive vaccination experience for children now so they can have a better experience later on in life.”

“We found parents were also more relaxed when their children were interacting with a robot during vaccination.”

This proved to be the case for Jennifer Crawford when her five-year-old son, Jacob, participated in the study. She says annual influenza immunizations had always been traumatic for Jacob. This year, however, Crawford says the vaccine wasn’t a big deal for her son.

“You wouldn’t even know he got vaccinated because all he would talk about for the rest of the day was the robot,” she says. “The vaccination itself was almost like an afterthought in his story about the robot.”