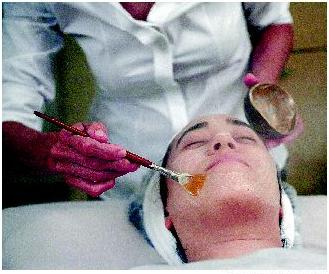 In this Wednesday, July 17, 2013 photo, salon owner Shizuka Bernstein gives what she calls a Geisha Facial to Mari Miyoshi at Shizuka New York skin care in New York. The facial, which Bernstein has been offering for five years, is a traditional Japanese treatment using imported Asian nightingale excrement mixed with rice bran, and goes for $180 a pop. (AP Photo/Mary Altaffer)
[/caption]Bird Poop Facials? $180 At This NYC Spa

The quest for beauty at a spa is expected to be painful, but nobody ever said it had to smell nice. That's what $180 won't get you at this New York City Spa, where the Geisha Poop facial is available. According to the spa, Geishas and aristocrats have used bird excrement as a facial scrub for centuries in order to maintain healthy skin, reports ABC News.

Spa owner Shizuka Bernstein, a Tokyo native married to an American, says she's trying to bring a bit of her culture to Americans.

"I try to bring Japanese beauty secrets to the United States," said Bernstein, who learned the treatment from her mother.

The spa is quick to mention: it's not pigeon poop they're putting on your face. The spa attendants use a specially selected bird, the nightingale, because they live on seeds which produce the necessary enzyme for healthy-looking skin.

The aroma of the facial wash used smells slightly of toasted brown rice, which is mixed in with the dried and ground active ingredient. The paste is then brushed onto the face of the customer and massaged in by hand. After five minutes, the paste comes off with soap and water and is replaced with a green tea collagen mask. The entire process takes about twenty minutes.

While the process is all the rage in parts of the world, many consumers are naturally hesitant to rub excrement on their faces. I'm with them. The next time I'm in the mood for a facial, I believe I'll have a nice apricot scrub instead.

On The Web:
Dropping $180 for Bird Poop Facials at NYC Spa
http://abcnews.go.com/Weird/wireStory/dropping-180-bird-poop-facials-nyc-spa-19852848