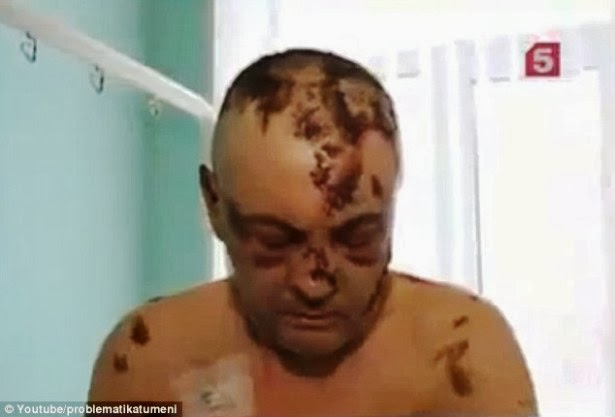 Flesh Eating Drug Krokodil Spreading, Now In The US [/caption]Flesh-Eating Drug Spreads to the US

The drug known as "krokodil" (German and Swedish for "Crocodile") appears to be aptly named for the hidden threat it contains. The drug is an opiate which uses codeine mixed with alcohol or oil and is subsequently injected into the veins. Variations of krokodil may use paint thinner or even gasoline in lieu of alcohol. In some cases, krokodil causes an infection which can turn the skin to a greenish color and eventually rot away. Therefore, krokodil has the nickname "flesh-eating drug".

The drug is especially problematic in Russia where the first cases of the flesh-eating side effect were noted a decade ago. Formally, the drug is called desomorphine and is a major problem in Russia where just two years ago 65 million doses of the drug were seized by police.

Dubbed 'the drug that eats junkies', it rots from the inside, causing such severe damage to tissue that users suffer from gangrenous sores which open all the way to the bone.

Now, the first cases of the flesh-eating side effect have appeared in the United States meaning that desomorphine may have hit the streets.

There have been two known instances of the drug being used in Arizona, a poison control expert told KLTV there.

A toxicologist at Banner Good Samaritan Poison and Drug Information Center reportedly fears the use of the drug in the US because the damage it inflicts is so severe.

The drug is made from mixing codeine with hydrocarbons, like gasoline, paint thinner, oil or alcohol. It is then injected.

“They extract (the drug), and even though they believe that most of the oil and gasoline is gone, there is still remnants of it,” Frank LoVecchio, the co-medical director of the Banner Health Poison Control Center in Arizona, told the TV station. “You can imagine just injecting a little bit of it into your veins can cause a lot of damage.”

LoVecchio would not elaborate to KLTV about the two cases, other than saying that they appeared to be linked. “Where there is smoke there is fire,” he added, “and we’re afraid there are going to be more and more cases.”

In Russia, there are as many as one million addicts who use the drug regularly because it is a cheap alternative to heroin. According to a Time magazine investigation, even those who manage to quit their addiction come away disfigured for life.

The Mail reports, some users in Russia develop brain damage and speech impediments in addition to the horrific scars.

According to Time magazine, 'Gangrene and amputations are a common result, while porous bone tissue, especially in the lower jaw, often starts to dissipate, eaten up by the drug's acidity.'

There have been no reported cases of Krokodil related deaths in Canada.

First cases of flesh-eating drug Krokodil surface in US
http://www.foxnews.com/health/2013/09/26/first-cases-flesh-eating-drug-krokodil-surface-in-us/

Horrific images of drug-users eaten alive by flesh-eating illness caused by homemade heroin substitute that has arrived on American shores in Arizona
http://www.dailymail.co.uk/news/article-2432802/Drug-users-eaten-alive-flesh-eating-illness-caused-homemade-heroin-substitute-Krokodil.html#ixzz2g6A7UPNj