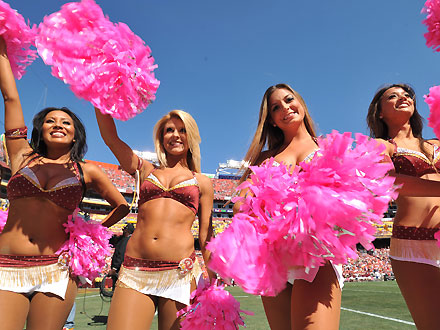 October is here again with people getting ready for the upcoming holiday season. Football is back in full force, and of course so is the celebrated breast cancer awareness month. Support is shown throughout the league with the pink attire, even referees going so far as to having pink flags. As the NFL goes all out in support, now even cheerleaders, the more appropriate group to support breast cancer, are becoming part of the action.

The popularity amongst cheerleaders has shown to become ever so increasing donning pink wherever possible to help raise funds and awareness. Cheerleaders, usually known for their skimpy outfits, now have a cause focus reason to dance around the stadium. This will no doubt add to the variety of outfits worn by the cheerleaders. NFL Cheerleaders often change outfits multiple times per game. Allowing a pink performance will no doubt add to the attraction to the cause. Fortunately for the overall cause, it is helping with more news coverage specifically on the cheerleaders efforts.

It will be interesting to see how cheerleaders interact outside of the game and sidelines with the overall community. After the game is over, how will the cheerleaders support continue to grow?

The cheerleaders aren't the only ones going pink. Throughout the month, NFL games have been featuring:

- Game balls with pink ribbon decals used for every down.