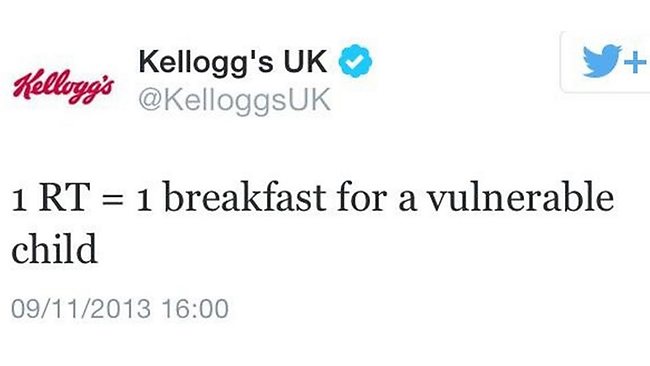 Kellogg's UK, best known for the sweet breakfast cereal it manufacturers and distributes, hit a sour note when it posted a tweet on Twitter recently, reporting it would provide one breakfast for a disadvantaged child for every retweet of its posting. Many Kellogg's followers who received the message criticized the company for connecting its generosity to the amount of publicity it would receive, but officials at Kellogg's were quick to apologize and explain it was simply attempting to bring more awareness to the launch of its new "Give a Child A Breakfast" campaign.

Many people posted tweets saying that they were angry that needy children would go hungry if followers neglected to re-tweet the original Kellogg's message while others felt that Kellogg's was blackmailing customers into helping them feed hungry youngsters.

Many followers continued to be critical even when Kellogg's apologized for its use of "the wrong words" in trying to publicize its charitable program. Kellogg's UK quickly took down the offending post and replaced it with one that explained that the cereal giant was helping to fund breakfast programs for needy children with grants and food vouchers, listing a website where people who wanted more information could click and visit.

On The Web:
Kellogg's Sorry For 'food for tweet' Gaffe
http://www.adelaidenow.com.au/technology/kelloggs-sorry-for-promising-food-to-poor-kids-in-exchange-for-re-tweets/story-fnjwnorf-1226757748106?from=public_rss