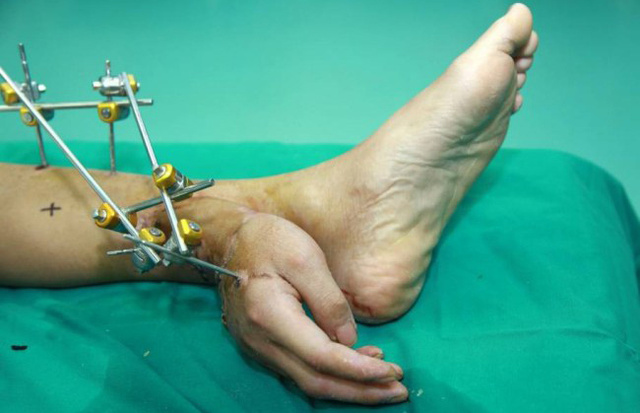 Severed hand Attached To Ankle: Severed body parts can be reattached elsewhere on the body, but usually to areas with a better blood supply than the ankle, BBC News reports. (BBC News)[/caption]

Quick thinking doctors at a hospital in China have managed to save a worker's severed hand for later reattachment to his wrist by grafting it onto his ankle to keep it alive.

A factory worker named Xiao Wei was involved in an industrial accident in which his right hand was severed near the wrist.

Mr Wei said: 'I am still young, and I couldn't imagine life without a right hand.'
Seven hours after the incident, he arrived at the other hospital in Changsha.

Due to a variety of reasons, doctors could not immediately reattach the severed hand to his wrist in a surgical operation, so a team of surgeons did the next best thing to prevent the hand from dying.

Dr. Tang Juyu managed to attach the hand to the man's ankle so that it could continue to be fed blood from his leg artery in order to keep it alive and in good condition until the patient was ready for undergo the hand reattachment operation.

“I just thought it was miraculous. I would never have thought that my hand could be saved,” Xie told a Chinese news agency after the accident.

Within 30 days time, the patient's doctors determined that he could undergo successful hand reattachment surgery and they were able to detach the hand from his foot and reattach it onto his right wrist. This picture taken on December 4, 2013 shows a doctor checking Xie Wei's hand grafted to his ankle in a hospital in Changsha, central China's Hunan province.[/caption]

"The concept of saving a severed part of the body by attaching it to another part of the body to give it a blood supply is well recognized," says Cairian Healy of the Royal College of Surgeons in England in an interview with BBC News. Healy notes that procedures like this are rare, but not unheard of, and that Chinese doctors are "pretty experienced in microsurgery." Following a car accident, Chinese doctors recently grew a nose on a man's forehead to surgically form a replacement for his damaged nose.

Wei will have to undergo another surgery in about six months, but doctors would not speculate on whether or not he will regain complete use of the hand that had been severed.

Earlier this year another Chinese man had a new nose grown on his forehead after a traffic accident. Man whose hand was severed has it attached to his ANKLE for a month to keep it alive before being reattached
http://www.dailymail.co.uk/health/article-2524539/Man-hand-severed-attached-ANKLE-month-alive-reattached.html

Related Topics:Severed hand attached to ankle
Up Next

Mandela feud starts as locks are changed on grandson