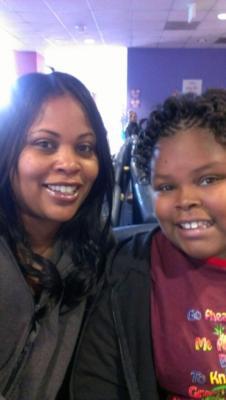 A tonsillectomy is generally a routine surgery in which a child or adult goes to have their tonsils removed for various health reasons. However, in the case of a teenage girl named Jani McMath, it was not such a routine operation. McMath, who is only 13 years old, went in for this everyday procedure and something went terribly wrong.

Doctors and other officials at the Children's Hospital in Oakland, California are not sure as to what exactly happened but during the procedure the young girl started to bleed profusely from her nose and mouth and is now clinically brain dead.

“[They] told me my daughter would be home on Tuesday and now you tell me she’ll never come home again!” McMath’s mother, Nailah Winkfieldsaid, told News One.

Currently, the hospital staff and officials at the Children's Hospital are working hard to review the case in which this innocent young woman was left brain dead.

Jani McMath is now currently hooked up to a life support system and a ventilator which will keep her alive until her family decides what to do.

“I was the last one to see Jahi,” Sandra Chatman, the girl’s grandmother, told reporters. “I said, ‘Somebody help my baby please!’ And they came in and starting working on her. The next thing I know, the doctor said, ‘Oh no, she doesn’t have a heart rate anymore.’”

McMath's mother, Nailah Winkfield, was quoted as saying, “I am not leaving unless she leaves with me because I will not let them pull the plug on my child.” What started as a ordinary surgery ended in this teenager becoming brain dead.

According to News One, Melinda Kriegel, a representative of the hospital, denies that the hospital neglected McMath. She said the hospital will investigate what went wrong with McMath’s tonsil surgery.

"We're very sad about this outcome, about what's happened to her, but at this point I have no information on the details of the surgery,” Kriegel said in a statement. “We will certainly investigate what happened. In any surgery there are risks and there can be unexpected, unanticipated complications."

Tragically, the doctors claim that she will not recover.

Teen Goes In For Routine Tonsil Surgery And Winds Up On Life Support
http://newsone.com/2813129/teen-goes-in-for-routine-tonsil-surgery-winds-up-on-life-support/