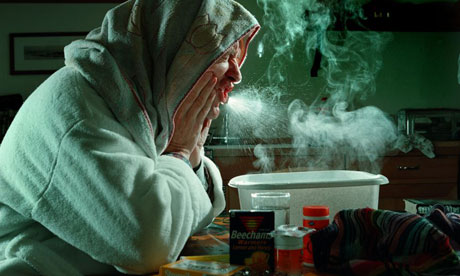 Everyone knows about how women joke that their husbands or significant others become babies when they get sick with the “man flu.” They joke about how the same simple illness can completely put their man out of commission as if they just enjoy being coddled. In the defense of men everywhere, scientists have recently discovered that the “man flu” is real.

A recent Standford study has shown that men are more susceptible to flu than women. Scientists believe this is because they have higher levels of testosterone. In the study that followed the effects of the flu vaccine on both men and women found that men had weaker immune systems then women. They also found that men who had higher levels of testosterone were more susceptible to the illness then men with lower levels.

"There are marked differences between the sexes in their immune response to infections and vaccination, with females often having significantly higher responses," reads the study, posted on Proceedings of the National Academy of Sciences.

The Stanford study was conducted by taking the blood from 54 women and 37 men. The blood was then tested to see how the flu vaccine interacted with each person’s immune system and blood proteins and it revealed that men with higher testosterone had weaker immune systems.

Not only does this study prove that the “man flu” is in fact real, but it is the manliest of men who get hit with it the hardest.

On The Web:
Man flu is no myth, say scientists — and ‘manly’ men are more susceptiblehttp://www.windsorstar.com/health/men/myth+scientists+manly+more+susceptible/9321915/story.html
New study says 'man-flu' is a real thing
http://www.torontosun.com/2013/12/28/new-study-says-man-flu-is-a-real-thing

Related Topics:The 'man flu
Up Next

painkillers found in ice cream: Was Attack On Purpose?