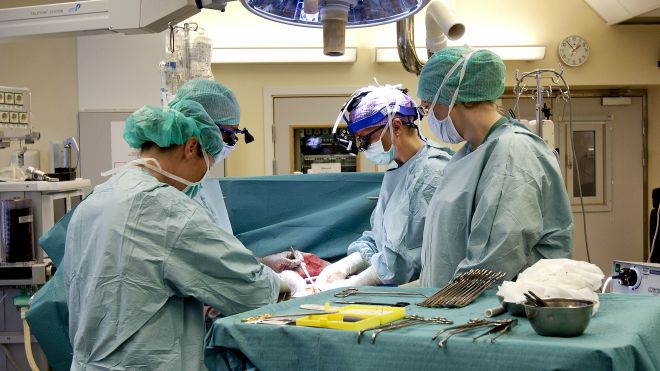 Sweden Successfully Conducts 9 Womb Transplants (photo Dreamstime)
[/caption]If Sweden's current undertaking proves successful, women who are barren may be able to give birth to their own children by getting a womb transplant.

Womb transplants offer an alternative to surrogacy or adoption for women whose own wombs have been damaged by diseases such as cervical cancer.

Thus far, surgeons in this prosperous Scandinavian nation have successfully transplanted wombs in 9 women each of whom are in their 30s. The recipients were either born without a womb or had it removed for health issues such as to prevent the spread of cervical cancer.

Now comes the most difficult part which deals with child birth. Each woman will need to get pregnant and carry the child to full-term. The past decade has seen a rise of successful transplants of hands, feet, and even faces. Now, this revolutionary procedure may allow women to give birth to their own biological children.

Both Saudi Arabia and Turkey have succeeded at transplanting wombs, but neither resulted in a pregnancy. The United States, Hungary, and England each have plans to conduct womb transplants, but no country has progressed as far as Sweden.

"Mats has done something amazing and we understand completely why he has taken this route, but we are wary of that approach," said Dr. Richard Smith, head of the U.K. charity Womb Transplant UK, which is trying to raise 500,000 pounds ($823,000) to carry out five operations in Britain.

The procedure raises some fundamental ethical questions, including, is it just too risky? Is it worth the risks — not just to one person, but the risks to the donor, the recipient and the prospective child — just to allow a woman the chance to have her own genetic and biological child?

“It’s very difficult for us of course to calculate the risks and the benefits, because we don’t know that yet,” Brannstrom said. “But it’s the same ethical debate when IVF (in vitro fertilization) was introduced.” The Swedish research team practices before the operations to transplant wombs at the Sahlgrenska Hospital in Goteborg, Sweden. Nine women in Sweden have successfully received transplanted wombs donated from relatives and will soon try to become pregnant, the doctor in charge of the pioneering project has revealed. (AP PHOTO/UNIVERSITY OF GOTEBORG, JOHAN WINGBORG)[/caption]

Dr. Mats Brannström from the University of Göteborg confirmed that he and his colleagues will be operating a training session or workshop on how to successfully transplant a womb. The workshop is consistent with Sweden's view of "solidaritet" or solidarity among mankind.

For more details about the research and to find out about making a donation visit: www.wombtransplantuk.org.

On The Web:
Women in Sweden receive womb transplants
http://www.foxnews.com/health/2014/01/13/swedish-doctors-transplant-wombs-into-women/