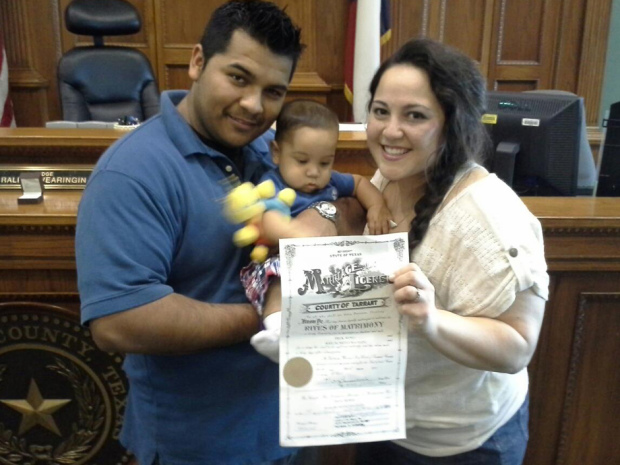 Marlise Munoz with her husband Erik and son.
[/caption]Husband Sues Hospital for Keeping his Brain-Dead Pregnant Wife on Life Support

A suit filed on Tuesday in state district court is asking a judge to mandate John Peter Smith Hospital in Fort Worth, Texas to remove Marlise Munoz from life support.

Marlise Munoz was 14 weeks pregnant when she was left brain dead two months ago possibly by a condition called pulmonary embolism, which describes a sudden blockage in a lung artery, usually due to a blood clot. Her husband, Erick Munoz, is now suing the hospital for keeping his wife on life support against her and her family's wishes.

Munoz says that he and his wife, both paramedics, discussed this very scenario and end-of-life issues. He states his wife expressed that she would not want life support in such a state. Marlise Munoz's parents also agree life support should cease.

Complicating matters is that there appears to be no easy legal solution. Peter Smith Hospital asserts a Texas law prohibits not giving pregnant patients life-saving treatment.

"Marlise Munoz is dead, and she gave clear instructions to her husband and family -- Marlise was not to remain on any type of artificial 'life sustaining treatment', ventilators or the like," the lawsuit says. "There is no reason JPS should be allowed to continue treatment on Marlise Munoz's dead body."

"Marlise has a fundamental right to make medical decisions regarding her own body," her husband contended in the motion. "... To take those rights away from Marlise, and force her to be subject to various medical procedures simply because she is pregnant, is a gross violation of her constitutional right." Meanwhile, experts familiar with the state law say the hospital is wrongly applying the law. Because Munoz has lost all brain activity, the experts say she is medically and legally dead. As such, the statute simply does not apply to her condition.

"This patient is neither terminally nor irreversibly ill," said Dr. Robert Fine, clinical director of the office of clinical ethics and palliative care for Baylor Health Care System. "Under Texas law, this patient is legally dead."

"She's not a patient anymore," Mayo said. "And so I don't see how we can use a provision of the law that talks about treating or not treating a patient in a case where we really don't have a patient."

"It's very frustrating, because we know what our daughter wanted, and we're not about to honor that because of this law," Lynne Machado, Munoz's mother, told ABCNews.com last month. "The grieving process as a whole for me and my husband and Erick [Munoz's husband] won't happen until she's off life support."

The family now hopes the judge orders the hospital to cease life support for Munoz.

Doctors have told Erick Munoz they are monitoring the fetus, but Munoz has said he's uncertain about how healthy the fetus will be given his wife's condition.

A 2010 article in the journal BMC Medicine found 30 cases of brain-dead pregnant women over about 30 years. Of 19 reported results, the journal found 12 in which a viable child was born. It had post-birth data for two years on only six of them -- all of whom developed normally, according to the journal.

Diabetes Risk Lower in Women Who Work Out