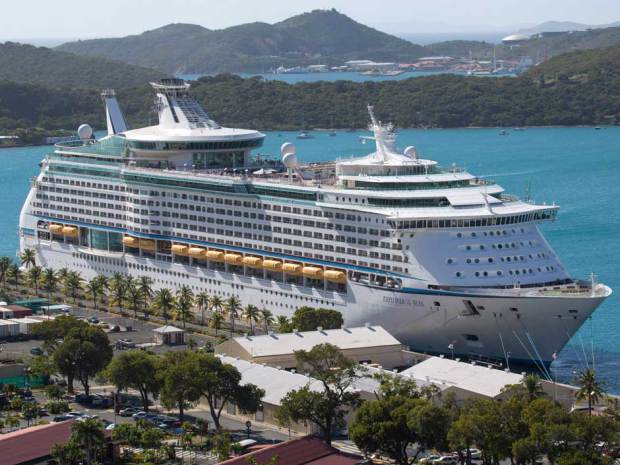 The Royal Caribbean International's Explorer of the Seas is docked at Charlotte Amalie Harbor in St. Thomas, U. S. Virgin Islands, Sunday, Jan. 26, 2014. U.S. health officials have boarded the cruise liner to investigate an illness outbreak that has stricken at least 300 people with gastrointestinal symptoms including vomiting and diarrhea
[/caption]Royal Caribbean Ship Ends Trip Early Due to Outbreak of Illness

It has not been a good year for cruise lines with the outbreak of the Norovirus which is potent invoking heaving diarrhea and vomiting in victims. It should be noted that the Norovirus is initially contracted by fecal matter getting into the food & water supply and then being transmitted by human contact. Ew!

Now, a ten-day trip by Royal Caribbean Explorer of the Seas vessel carrying over 3,000 passengers had to end prematurely due to a mysterious outbreak of something that caused norovirus-like symptoms in as many as 1 in 5 passengers. However, the exact tally of affected passengers during the worst part of the voyage on Sunday has not been revealed.

“New reports of illness have decreased day-over-day, and many guests are again up and about. Nevertheless, the disruptions caused by the early wave of illness means that we were unable to deliver the vacation our guests were expecting,” Royal Caribbean Cruises Ltd. said in a statement.

The ship left port in New Jersey, but they the time they docked into port at the US Virgin Islands, members of the U.S. Centers for Disease Control and Prevention were already waiting to board the vessel and investigate the cause of the illness outbreak. In the end, Royal Caribbean agreed with a recommendation from the CDC to cut the voyage short. Royal Caribbean said there was no point in doing the full voyage at that point as customers weren't getting their money's worth. They got that right. It will take some testing to determine if the Norovirus was once again to blame.

For the time being, CDC members have placed the sick in quarantine who, for the most part, are showing signs of improvement.

"Those affected by the short-lived illness have responded well to over-the-counter medication being administered onboard the ship," Royal Caribbean International told Fox News, adding “We sincerely apologize for the disruption to our guests’ cruise vacation.”

According to the Huff Post, this wouldn't be the first time the norovirus has thrown a Royal Caribbean cruise off course this year. On January 18, the Majesty of the Sea
had to shorten its four-day voyage from Miami after 66 passengers fell ill, the Bermuda Sun points out.