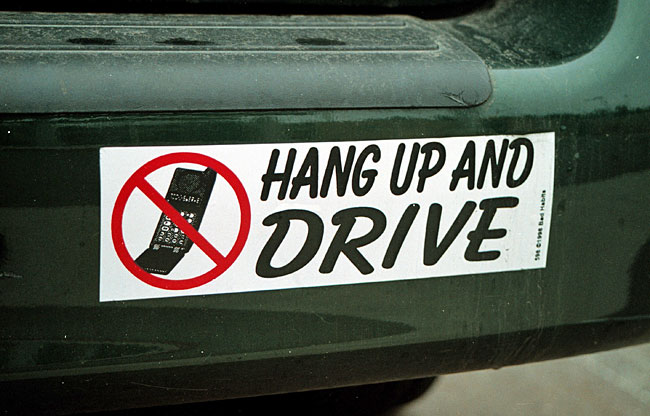 Canadian Doctors Demand Tougher Penalties for Auto Cellphone Usage[/caption]Two medical doctors in Montreal are waging war on the many drivers in Canada who insist on using cellphones for talking and texting while driving their vehicles, despite the fact that such actions are illegal.

Dr. Charles Press and his father, Dr. Barry Pless, have written an emotional editorial about the topic in the British Medical Journal, insisting that tougher penalties should be applied to drivers who break the law regarding cellphone usage for texting and talking while driving because they pose an increasing risk of danger to all motorists as well as pedestrians.

Although both doctors admit that there have been no definitive studies about the effect of distracted driving on causing accidents and fatalities, they are calling on Canadian lawmakers to do something drastic to stop the increase of what they consider is extremely dangerous behavior with deadly consequences, Pless said Tuesday from Montreal.

“So part of the responsibility lies with the law makers to make sure the penalties are severe,” he said, noting that New York state has proposed legislation that would double a young driver’s licence suspension from the current six months for texting while operating a vehicle.

“If you’re a kid and you know you’re going to lose your licence for a year ... and you have a reasonable expectation of being caught, then one hopes that you will be persuaded not to do it.”

Even though there have been public service campaigns mounted to alert people to the dangers of distracted driving caused by the illegal use of cellphones while driving, the doctors feel it has barely made a dent in the public's consciousness about the problem. They are both urging that lawmakers enact much stricter penalties, such as suspending driver's licenses for one year.

Below is an excerpt from editorial:

Time to act: they’re responsible for a quarter of crashes in the US

Although a review of the recent literature found that the evidence for a causal association between mobile phone use while driving and crash related injuries was not clear cut,1 with a quarter of crashes in the United States now attributed to mobile phone use, we can’t wait for perfect evidence before acting.2

In 1997, Redelmeier and Tibshirani found that mobile (cell) phone use was associated with a quadrupled risk of crashes,3 although last year a study cast doubt on some components of the association.4 While most early studies unequivocally supported the view that mobile phones made driving more dangerous, some later reports arrived at contradictory conclusions, especially with regard to hands-free phones.5 Part of the confusion may be due to the mix of laboratory and observational epidemiological studies that characterise this field. Nevertheless, given the proliferation of mobile phones, the prevalence of distracted driving is undoubtedly increasing.

Texting is obviously the riskiest activity because the distraction is cognitive and visual; handheld phone use (particularly when making or receiving calls) comes next; and hands-free use is probably the least dangerous. Convincing causal associations are notoriously difficult to determine, particularly in this area. Causality can be inferred only from randomized trials, and it is doubtful if a real world trial could be designed that would receive ethical approval. Laboratory studies using such designs are possible (and plentiful) but not persuasive. However, physicians and policy makers must often make decisions and act before they have solid proof. We therefore decided to proceed by taking as “given” that the risk was causal, substantial, and likely to grow unless more successful preventive measures are introduced. Possible interventions include the “usual suspects”: education, legislation, and technology.

Education is the preferred choice of many, especially governments, because it is inexpensive, inoffensive, and politically “easy.” Generally, health education is of two kinds: counseling of individual patients by health professionals or more broadly targeted media campaigns. Evidence supporting the effectiveness of patient education is limited.6 In some domains, such as smoking cessation, physician counseling can be surprisingly effective.7 8 Counseling may be more effective when provided in an appropriate context, such as in the use of seat restraints with parents of newborns.9 Experience suggests that patients in the emergency room after an injury are also more open to receiving messages about preventive strategies and equipment. But, even if we had solid evidence that counseling about the dangers of distracted driving was effective, it is unlikely that it would reach those at highest risk or be the best use of limited physician time.