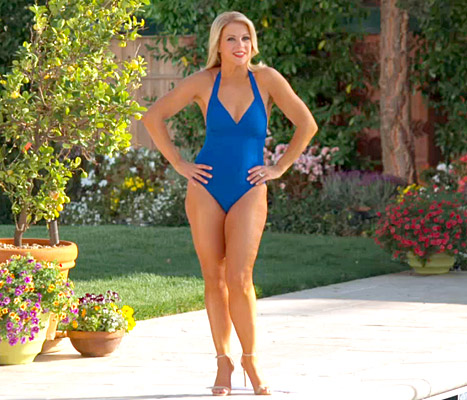 Nothing can turn back the clock on aging quite like a healthy amount of weight loss. Such is the case for actress Melissa Joan Hart, age 37. Her 40-lb weight loss has changed her appearance from a mid-40s soccer mom look to a late 20s early 30s beauty. The secret to the success was the Nutrisystem diet of specially prepared foods allowing people to eat items such as meat loaf, pizza, pasta dishes, chips, brownies etc. that are designed to encourage weight loss.

In her case, the weight gain began with pregnancy and continued through unhealthy eating habits. However, she admits her focus wasn't on losing weight, but rather bonding with her child. Once she was comfortable that she had the time to devote to getting back in shape, she went full-board into the effort.

So what's her secret?

The actress does have one special weight-loss secret weapon—and we're not talking Nutrisystem.

It's her inspiring sister-in-law, Sally Wilkerson, who began her own weight-loss journey about 17 years ago, losing (and keeping off!) 136 pounds, according to People.

"Sally taught me that you want to feel good about yourself," says Melissa. Per People, the actress has lost 35 pounds since having a baby 15 months ago.

Sally helps Melissa stay motivated and reminds her to make smart exercise and diet choices: "When we go on vacation, I tend to go, 'This is my excuse to pig out!'" Melissa told People. "But I see what Sally is eating, and I'll order what she's ordering. It keeps me on track."

The sisters-in-law are more evidence of just how crucial weight-loss support is. Adopt their smart strategy by teaming up with your own relatives, friends, or a weight-loss group to drop pounds.

Needless to say, it has paid off. The actress looked beautiful in her low-cut one-piece outfit during an interview with Entertainment Tonight (ET). In all, she confessed to exploding 60 lbs as a result of her birth to son Tucker back in 2012. Initially, the Nutrisystem diet helped her shed 20 lbs last April. She stuck with it and the pounds steadily melted off.