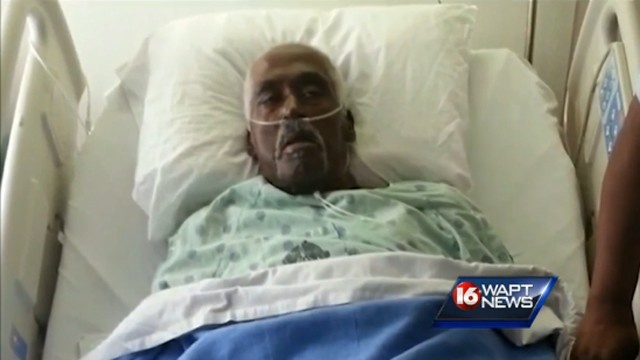 ‘A miracle’ ... Walter Williams was pronounced dead on Wednesday but was conscious again the next day. Picture: WAPT News. Source: Supplied[/caption]

Man wakes up in body bag

According to media reports Friday, a Mississippi man woke up in a body bag as funeral home workers prepared to embalm him.

The coroner came to the house and pronounced him dead at 9 p.m.

“I stood there and watched them put him in a body bag and zipped it up,” Williams’ nephew, Eddie Hester, told WAPT.

Williams was taken to Porter and Sons Funeral Home. They were getting ready to embalm him, and that’s when he started kicking inside the body bag. Still alive ... Funeral workers were about to embalm Williams, until they found him wriggling in this body bag. Picture: WAPT News Source: Supplied[/caption]

“He was not dead, long story short,” funeral home manager Byron Porter told WAPT. He said this was the first time he’d ever seen anything like it.

According to CBC News, Williams was rushed to a nearby hospital. Holmes County coroner Dexter Howard said it’s possible that Williams’ pacemaker shut down and then started up again.

“It was a miraculous moment,” said Howard, who is an elected official and not a medical doctor. “Never in my life have I seen anything like it.”

Howard, who has held the post of chief coroner since 2002 and was deputy coroner before that, said he visited Williams in the hospital Thursday night.

“His daughters were there and he was talking a little, but he’s still weak,” he said.
Williams’ family members say they’re happy he’s alive.

“I don’t know how long he’s going to be here, but I know he’s back right now,” Hester told WAPT. ”That’s all that matters.”

Family members said Williams is a fighter. He's been a long-time farmer and worked for the school board. One of the body bags Mr Williams narrowly avoided[/caption]

Man wakes up in body bag at funeral home
http://www.wapt.com/news/central-mississippi/man-wakes-up-in-body-bag-at-funeral-home/24722536