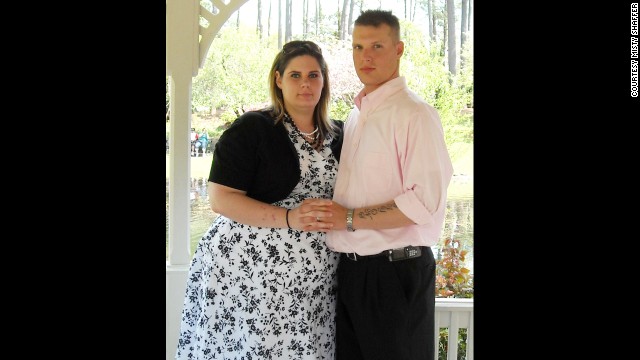 Misty surprised her husband at the airport when he returned from his deployment in May 2013. She had lost more than 100 pounds since his departure.[/caption]Army Soldier Returns from Afghanistan to Find Wife Dropped 100 Pounds

Leland, North Carolina - Specialist Larry Shaffer left his high school sweetheart and wife of four years to serve his country in Afghanistan for a one year tour of duty. That left Misty all alone to herself. It can sometimes be a deafening and frightening experience to be left to one's own devices, but sometimes that is exact the medicine that is required. Absent from the people sometimes leaned on and inadvertently used as enablers of bad behavior, a person can finally come to terms with their inner problems.

Such was the case for Mrs. Shaffer who at 5'6" weighed 260 pounds. There were times that she tipped the scales at 300 pounds. Regardless, her husband never had the strength to pick her up. She recalled for an interview with CNN that on one solitary night, as she sat in bed, she found her resolve and said within herself that she could lose the weight. Finding her inner voice, she was able to commence her journey.

Step one was eliminating the debilitating sugars from her diet. Out went the soda pops, candies, and other junk snacks. Just having them out of the house meant she was able to refrain from consuming them. Next, she went cold turkey on comfort eating. Misty Shaffer has struggled with her weight her entire life, and got picked on because of her appearance.[/caption]

This too was a difficult step as she discovered she ate when feeling happy, melancholy, angry, etc. The third step was to avoid eating unhealthy foods high in fat and calories. She incorporated vegetables into her diet often eating salads. However, she recalls the powerful allure that the aroma of friend chicken posed for her.

The first four months were by far the hardest and there were plenty of times she endured hunger. By the time her husband returned him, the former size 24 bride was now size 6 weighing 155 pounds fully 100 lbs lighter. She leapt into his arms and he was able to carry her for the first time.

Misty Shaffer 100 pound weight loss
: Misty Shaffer has struggled with her weight her entire life, and got picked on because of her appearance.[/caption]