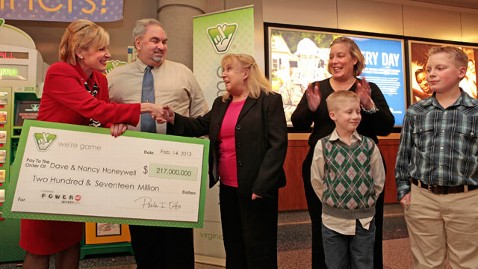 The lucky couple from Virginia,, Dave and Nancy Honeywell, has won the states second largest lotto prize ever awarded. Their lottery winnings come in at a whopping $217 million which was the Power ball jackpot offered in their state.

Dave, a computer scientist and wife Nancy who also works for the Department of Defense purchased his winning ticket at a Richmond International Airport’s Lottery Express station.

The numbers that turned the Honeywells into millionaires are 5-27-36-38-41. These very lucky numbers where chosen randomly by the Lottery Express stations Easy Pick computer feature.

Dave Honeywell plans to continue working for six weeks and is then leaving his job to enjoy his life as a millionaire.

On February 14, 2013 they received a large payout of $136.4 million. Before receiving this hefty one time payout they attended a press conference where they discussed their amazing win. The couple is no longer speaking to the media.