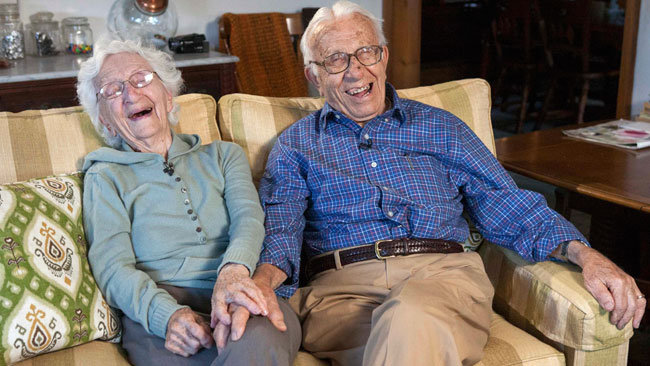 Some people head to divorce court by the time they experience the 7-year itch, but for John and Ann Betar, marriage is truly a lifetime commitment. The couple, considered the longest married couple in America, recently observed their 81st anniversary. Although currently residents of Connecticut, the couple left Harrison, NY back in 1932 in order to elope. 98-year old Ann explained that elopement was necessary in order to prevent her father from interfering. Her 102-year old spouse recalls that all of their relatives were furious but predicted the marriage wasn't destined to last.

"Everyone was hopping mad, and my wife's aunt consoled my father-in-law by telling him not to worry, the marriage won't last," chuckled John Betar, who is still driving "though not quite as fast as the day we got married."

"He was 21 and used to drive me to high school in his Ford Roadster," she added.

"That's why she married me, she loved that car," joked John Betar, as he sat on a couch holding his wife's hand in the waterfront house they have shared since 1964.

John and Ann Betar have had the last laugh and a good family life together. Although two of their five children have already pre-deceased them, they also count 14 grandchildren and 16 great-grandchildren among their extended brood. John Betar revealed that the secret to longevity in marriage is "to always agree with your wife." The Betars were named America's Longest Married Couple by Worldwide Marriage Encounter, replacing the previous record holders, Victoria and Steven Wrubel who were married for 83 years of wedded bliss prior to Mrs. Wrubel's passing this past spring. Both Betars admit they can't believe how much change they've seen over the past eight decades.