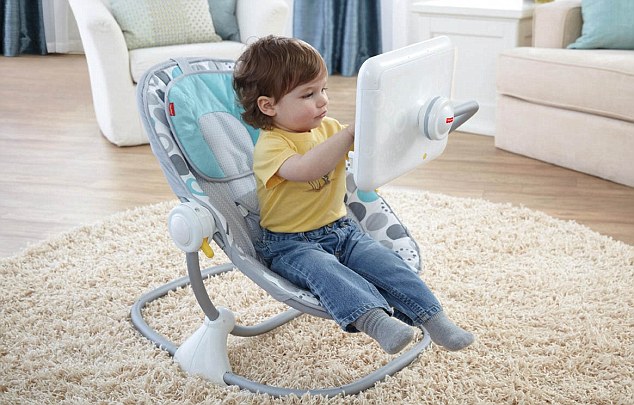 A new baby seat that comes complete with an iPad holder for the toddler that wants to view his or her apps without distraction is rising quite a bit of controversy from groups that say screen time at this age can actually hurt a child’s development. The Fisher Price creation is called the Newborn-to-Toddler Apptivity Seat and is designed to offer parents the choice of placing their iPad under a mirror so that a baby can view the iPad without getting their hands on it. This protects the device from gooey hands from children that tend to change settings and click into apps they shouldn’t be.

According to the Fisher Price website, the company also offers apps for use with the seat that offer nature scenes, black and white contrast images, and patterns. All of these apps are supposed to help with a child’s development much like a book would. However, groups such as the Boston Campaign for a Commercial-Free Childhood are outraged stating that early screen time has been proven by the American Academy of Pediatrics to actually lead to learning problems, language delays, and sleep disturbances. They say that instead of playing with ipads, children need to be interacting with parents and playing with hands-on toys.

Victor Strasburger, a doctor and professor of pediatrics at the University of New Mexico School of Medicine said attaching iPads to babies’ seats is 'a terrible idea.'
'Does anyone out there think that kids need more screen time?” Strasburger asked. “There is no need to hurry to expose kids to new technology, certainly not babies — or newborns!'

A $100 Million Collector’s Car May Soon be sold