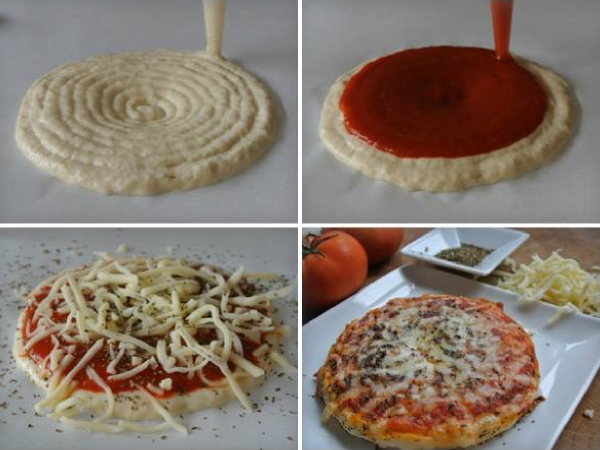 3D printers are already creating everything from handguns to toys, but now fans of the revolutionary printing technology can create food dishes as well thanks to the new Foodini 3-D machine. The new printer capable of making such food items as cakes, pizza pies, and a variety of pasta shapes, won't be available until the second quarter of 2014. The Foodini, as the new printing device is called, creates food items by building it in a series of layers using fresh ingredients that have been fed into the machine, then squirted out into a particular pattern as directed by selections on the control panel.

"They can both print food in-store to sell to consumers as well as sell pre-filled food capsules for consumers to take home to use in their machines."

The machine is expected to cost more than $1,000 and will market capsules of fresh ingredients separately. Spain-based creator, Natural Machines, calls its new food printer a combination of design, art, food and technology. One of the more popular uses of the food printer will be the ability to create personalized messages on birthday and anniversary cakes in addition to creating food in shapes that are appealing to children, such as dinosaurs and cartoon characters. But its manufacturers admit that Foodini is not fool proof and doesn't have the ability to actually cook food.

"We're looking to go way beyond just chocolate … we're looking for everyday foods that you would eat," Kucsma said.

On The Web:
'Foodini': the machine where you can print your own food
http://www.telegraph.co.uk/foodanddrink/foodanddrinknews/10509991/Foodini-the-machine-where-you-can-print-your-own-food.html