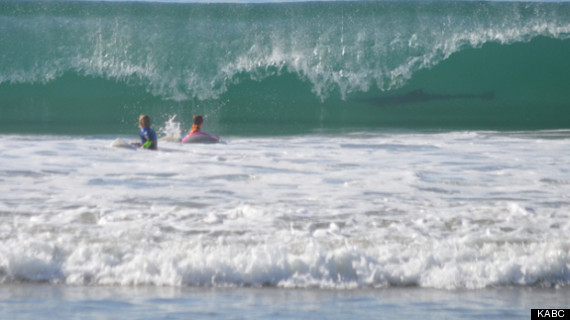 Reviewing family photos from a recent surfing trip to Manhattan Beach in California, June Emerson noticed an unwelcome third party: a shark. The photo quickly went viral after she posted it to Facebook and Instagram. The shark is seen in profile swimming along the cresting wave. Meanwhile, the boys are floating nearby and apparently heedless of the danger. Thankfully, no one was injured and the shark continued on its way.

Her young son and his friend were also blissfully unaware of the encounter at the time. Emerson responded to the publicity, saying "I'm overwhelmed to be honest. I just hope it calms down. This wasn't shared to promote fear--awareness is fine but not fear." The family initially thought the lurking sea creature may be a dolphin or other large animal. Lifeguards and other locals that she showed the photo to guessed a shark. While the photo is unclear, others have reported many Great White sightings in the area.

Shark sightings are increasingly common throughout beaches around the world, though attacks remain rare. The advent of online video, social networks, and waterproof cameras has given many surfers the world over a means to document and share sightings.

Related Topics:Socal surfers shark
Up Next