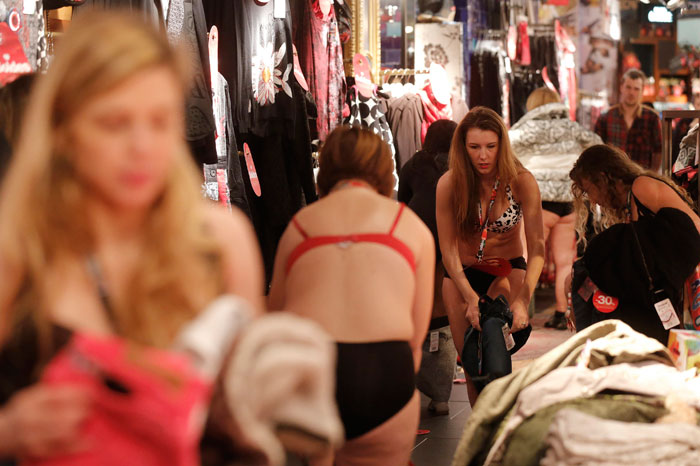 A fashion store in Paris had a very unique promotion in order to advertise their annual winter clothing sale. The Desigual shop promoted a SemiNaked Party in order to publicize the sale prices being featured on their winter fashions. The store offered to provide free outfits to the first 100 shoppers waiting in line who agreed to strip down to their underwear before entering the store. By the time store managers at Desigual were ready to open their doors for business, hundreds of Parisians had lined up outside the main entrance, stripped down to their lingerie.

The first 100 early birds obviously didn't mind showing everyone as much as they would see on the beachfront in summer and they were rewarded by being admitted to the shop in order to select their free outfit. Contest winners were given about 60 minutes to browse in order to make their free selection. This year's SemiNaked Party idea, however, was nothing new for the Desigual store in Paris, part of a chain of stores based in Spain. Desigual first kicked off the crazy promotion in 2005. The exact number of those willing to strip for free clothes this year was not reported.

On The Web:
Shoppers strip off to get free clothes in France
http://www.telegraph.co.uk/news/newstopics/howaboutthat/10558817/Shoppers-strip-off-to-get-free-clothes-in-France.html

Related Topics:shoppers strip for free clothes
Up Next