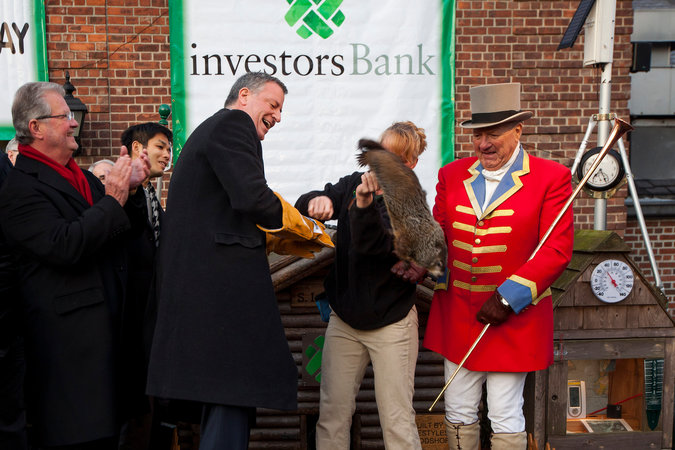 Alluding to 2009, when Chuck bit then-Mayor Michael Bloomberg, Mayor de Blasio stated, “Chuck and my predecessor didn’t always get along, let’s be honest about that. But I’m hoping we can start a new day, a new relationship here.”

Chuck, officially named Charles G. Hogg, had other plans for the mayor’s first Groundhog Day ceremony. Upon being lured out of his miniature log cabin dwelling and handed to the mayor, the groundhog sprung from the mayor’s arms, landing on the ground. The rodent was not injured and was collected instantly by his trusted handler, Kristin Campbell.

“It was a squirm, a squiggle,” said the general curator and veterinarian of the zoo, Marc Valitutto. “Chuck was a little bit nervous in new hands.”

Alas, Chuck did see his shadow, indicating six more weeks of winter. This was identical to the weather report delivered by Chuck’s counterpart, Pennsylvania’s Punxsutawney Phil. Despite the disappointing news and the unfortunate mishap in dropping Chuck, Mayor de Blasio remained benevolent, declaring, “Live by the groundhog, Die by the groundhog. Thank you, Chuck. Thank you for your honesty, Chuck. He tells it like it is.”

Related Topics:groundhog chuck escapes
Up Next

Real-life MI5 agent watch goes up for sale on ebay