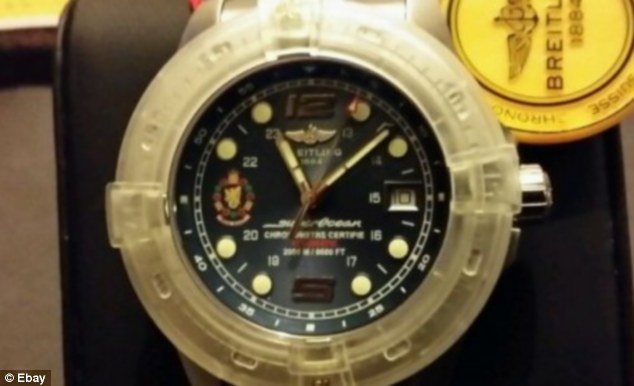 A former MI5 agent is struggling financially after being sacked from his job of 18 years and has put up for sale on eBay a special edition Breitling watch from the iconic spy agency. Now, there won't be any zip line or scaling technology stored in this particular watch, but it does represent a limited edition of the jewelry item which was made in 2009, the hundred year anniversary of the organization. It is believed that only several hundred of the watches were minted at a value of £1,000 per watch at the time.

Since that time, the operative was terminated from his employment. The markings on the watch indicate it is branded for MI5 with the agency's motto clearly engraved on the bottom side of the watch reading "defend the realm". The model of the watch is Superocean Steelfish.

For his part, the former agent is looking to cobble together funding for his education as he seeks employment in a new field of study. He explains that it is difficult for him to part ways with such an item, but he needs additional education to secure viable employment. He says he's received good offers on eBay, but it isn't clear how much money he'll make from the sale.

'I need the money to pay for my studies and even though the Security Service will be annoyed that I am selling it I have decided to go out and see what bids I get,' he told The Daily Mirror.

'So far I have had good offers and considerable interest on eBay and I must admit, I will be very sorry to be losing the watch as I have little to remind me of my time with the service.'

On The Web:
Ex-secret agent infuriates colleagues by putting special MI5 edition of Breitling watch for sale on eBay
http://www.dailymail.co.uk/news/article-2550527/Ex-MI5-agent-infuriates-colleagues-putting-special-edition-Breitling-watch-eBay.html