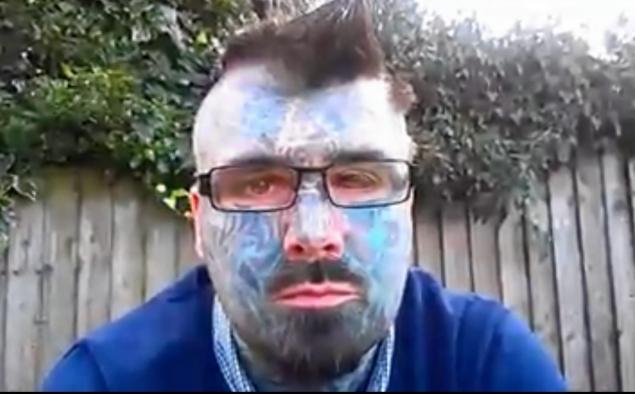 Birmingham, England - Britain's self-described most tattooed man had his application for a passport denied, but not because of the extreme use of tattoo ink on his body (which heavily relies on blue for his face and torso). Rather, the man formerly known as Mathew Whelan and now called "King of Ink Land King Body Art the Extreme Ink-Ite" says it is his name that resulted in the passport denial.

“This is a breach of my human rights,” he was quoted by the daily. “They want to put my birth name on my passport. But that is not my name any more,” he argued.

Admittedly, his name doesn't fit the first & last name format on the application. Would the application have the given name be "King" and the surname "Of" or would it be "Ink"? For his part, he says his name is simply abbreviated to Body Art. Again, that may be his abbreviated name but those words are deeply embedded in a 9 word name. However, it isn't the logistics of the name that is the problem, the passport department needs proof of the name change or so they say. He has provided the department with both a mortgage letter clearly showing his verbose name and his driver’s license.

He is demanding he get a passport which he needs to secure employment abroad. He's already received the job offer. He plans to seek the assistance of his local minister of parliament for help.

On The Web:
Britain's most tattooed man fails in application for passport after changing his name to King of Ink
http://www.dailymail.co.uk/news/article-2550454/Britains-tattooed-man-fails-application-passport-changing-King-Ink.html

The ladies man “Rake Ali” is the face of JD Sports – or is he?