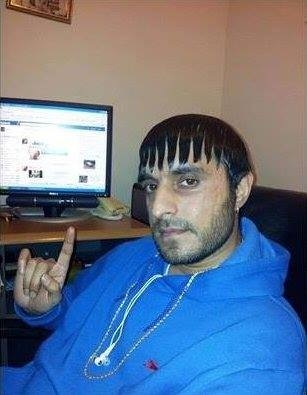 JD Sports is a fashion company dedicated to sportswear based in Manchester, England. While the company is still a relatively small corporation with net revenue of $41M in 2013, they are part of the FTSE 250 of the London Stock Exchange. Now, an innovative idea to invite the public to vote on a person to become the face of the company in billboard advertisements may have an unintended consequence. Presumably, the "face" of the company would be someone attractive, but instead the current vote leader is a peculiar man by the name of Raza Ali AKA Rake Ali.

Ali gets the nickname of "Rake" from the appearance of his hair. He has matted his bangs which extend over his forehead down to his eyebrows and separated them into the appearance of a rake. He believes that the hairdo is the key to his success as a ladies man. Rake Ali is currently the vote leader in the competition, but it is possible that is merely as a prank of sorts to compel JD Sports to plaster the image of this self-described ladies’ man with his horticulture tool-like hairdo on billboards. If correct, the company is in for an embarrassing ad campaign.

On The Web:
Ladies man 'Rake Ali' set to be new face of JD Sports after campaign hijacked by online pranksters
http://www.mirror.co.uk/news/weird-news/jd-sports-rake-ali-set-3116677